Anders Brødsgaard (b. 1955) is a rare compositional talent and a strong, richly faceted voice in Danish musical life. His major one-movement orchestral work Galaxy is constructed as one long hypnotic spiral motion, taking place in a zone of weightlessness, in unpredictable patterns and soft collisions. Coupled with the extremely diverting Monk's Mixtures for small orchestra, Galaxy offers the full view of a composer who draws on his heritage and at the same time is constantly on his way towards new horizons. 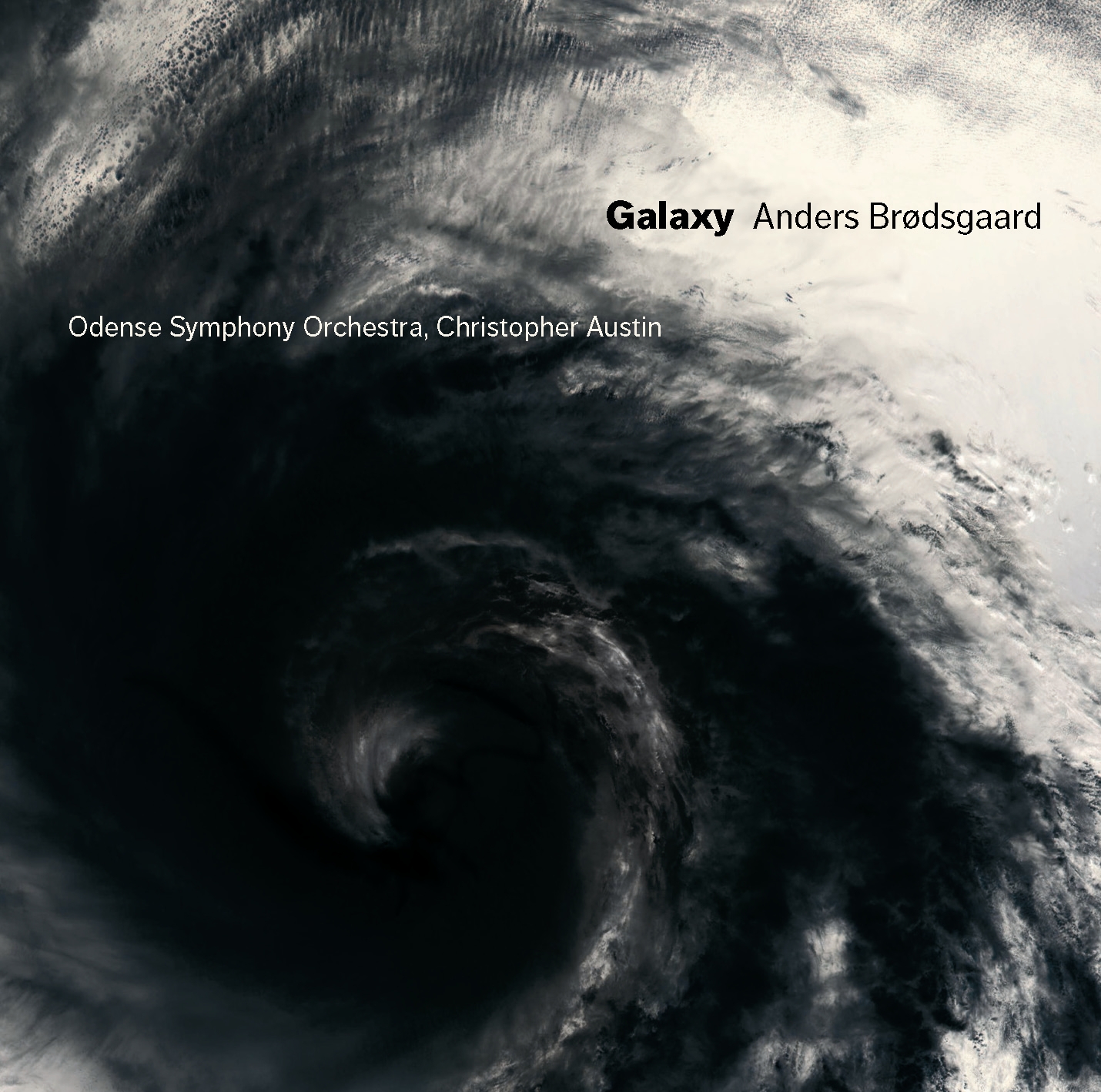 "Kyler sine udladninger ind i lyttersjælen, hypnotisk."
Mikael Krarup, Fyens Stiftstidende
"Excellent playing and vivid recorded sound make this a disc worth exploring."
David Hurwitz, Classics Today
"Det er til enhver tid et storartet værk."
Steen Chr. Steensen, Klassisk
SELECT PREFERRED FORMAT TO DOWNLOAD SINGLE TRACKS.
Total runtime:
70 min.
Anders Brødsgaard was born on the island of Funen in the mid-1950s, when musical modernism was all the rage south of the Danish border. It was as if this distant thunder brought him his birthright, for in his young, formative years he was totally absorbed in modernism. Brødsgaard began as a piano student, and his teachers included two female champions of twentieth-century music: Rosalind Bevan and Elisabeth Klein. But soon his own creativity made its debut, and for some years pianist and composer went hand in hand. In the work on music paper, too, he had outstanding mentors: Per Nørgård, Hans Abrahamsen and not least Karl Aage Rasmussen. These and many other names have contributed to the blossoming of a rare talent, a strong, richly faceted voice in Danish musical life who draws on his heritage but at the same time is constantly on his way towards new horizons.

Anders Brødsgaard worked on this major one-movement galactic work for two periods. The first half was created in the years 1990-93, then it lay idle for a while. With a view to a first performance in 1999 the second part was finished in the course of three hectic months. Galaxy is Brødsgaard's most volumi-nous orchestral work to date with a duration of 42 minutes. In it he wanted to challenge the audience to try to span a huge amount of information without pauses for breath. It should therefore be added that a CD recording may be the ideal medium for such a demanding work, as you can choose the time and place for listening to suit yourself. The orchestral ensemble is as ample as in a Mahler symphony: it prescribes two percussion groups with among other things two pianos, a harpsichord, two bass drums and one tam-tam placed on each side of the platform. The strings often play divisi and at certain points have 25 different parts.

Galaxy was composed as an attempt to challenge the ideologically entrenched thinking in con-tem-porary music, the -struggle between the speculatively technical and the spiritually sensual. On one front, in symbolic form, you have the whole Darmstadt School and all it implies, and on the other mentors like Per Nørgård and Karlheinz Stockhausen. Why not bring these two basic techniques toge-ther and let the work move between the two poles, alternate between the introverted, passive and explo-ratory processes like the harmony and the harmonic series, and the extroverted, active and inventive processes like melody and polyphony? In other words, an integration of tonal and atonal music, triads and cluster chords, diatonic scales and twelve-tone rows. It became important in this process that there had to be no ruptures - the music had to develop coherently, imperceptibly grow and contract, smoothly change tempo, move from the simply grasped to the overwhelmingly complicated, finally arriving at a synthesis on the highest plane.

As the bearing principle in the composition Brødsgaard chose the spiral form. In mathematics a spiral is defined by a plane curve coiling around a fixed point while approaching or receding from the same point; a circle in motion that returns to its point of origin but at a different level from before. In nature we know the spiral form from the galaxy, the DNA molecule, the tornado, the sunflower, the snail shell and even the water running out of the kitchen sink. Brødsgaard also mentions two subli-mated spiral forms in world literature as models: Dante's encounter with the Ten Heavens of Paradise in The Divine Comedy, and the final scene of Part Two of Goethe's Faust.

The spiral motion runs through Galaxy in two parts, that is, it forms a double helix. At first you hear the note D in one apparently unending breath, while at an underlying level the note is harmo-nized ‘spectrally' with the natural harmonics. A little later you hear the twin spiral on the note E flat, and so on. Quickly added to the process is a rising twelve-tone row in the double-basses, as a theme that comes to proliferate in what follows. For after a good 13 minutes the double helix has moved forward to twelve overlapping notes, each with its own overtone harmonies. All the events appear to take place in a zone of weightlessness, in unpredictable patterns and soft collisions. The tempo mark-ings vary, but you do not notice this.

There are four of these overtone-harmonized sections where the strings predominate in a con-stantly varying sound spectrum. Four times they are interrupted by the opposite pole, the wild, rhyth-mic, complicated, percussive and virtuoso music where the percussion of course predominates. The total of eight sections gradually draw together, become shorter and shorter, and in time you can grasp the 12-tone spiral that is built into each section, and the poles then merge: the divisive (regular) string music and the additive (irregular) percussion music fuse into something new and integrated. The ninth section is the turning-point. And look, says Brødsgaard: the acceleration that has just ended is reversed, and the whole work turns out simply to be a semicircular motion in an even larger spiral. Galaxy is dedicated to Karl Aage Rasmussen.

The jazz luminary Thelonious Monk, one of the first protagonists of bebop and a quite unique piano artist, more or less consciously haunts Monk's Mixtures (2009). Since his youth Brødsgaard has been inspired by the more progressive harmonies of jazz and the instrumentation of the big band, especially the phenomenon called the ‘thickened line' - the block harmonies that arise when you build up a melody line in several parallel parts. However, you also find this sonority in the disposition of the organ stops. The sound produced by the ‘mixture' stop comes from not one, but several ranks of treble pipes, as a rule at octave and fifth intervals, and the stop is normally supplemented with a given selec-tion of fundamentals to produce a unified strong and brilliant sound.

Anders Brødsgaard says that Monk has influenced his own view of harmony. Monk used dense, dissonant chords, indeed often clusters, and together with his jagged rhythms this playing style resulted in a unique personal idiom that left most listeners fairly mystified. Monk had none of the horror vacui of the other beboppers. The pause played a quite crucial role in his composition - he was extraordinarily economical with his material and left it to the listener to fill out the spaces, for example in his own versions of the classic ‘Round Midnight.

Monk's Mixtures emerges as an extremely diverting work. One is tempted to add that it is ‘neo-classical', because it evokes associations with the rhythmic magicians of the last century: the play of shifting time signatures, the displacements of the stress and the metrical counterpoint that also came to influence the great jazz musicians. The orchestral configuration is in principle that of Vienna Classi-cism, with winds in pairs and two score of strings, but extended with a rich, often resonant percussion battery. Precisely with a view to the basic idea of the composition - ‘mixture' sounds - the shrill pic-colo is often used at the high pitches, while the ‘offside' winds, the bass clarinet and the contrabassoon, operate in the depths in both solos and parts moving in parallel. In this way, contours strangely remini-scent of the Duke Ellington and Gil Evans orchestras emerge from the mists of sound without leading you to believe that Brødsgaard intended to write a true jazz score. But the inspiration is not to be denied, as indeed the movement titles express: Moving, Walking and Flying.

Woodwind, brass and strings. These are the three sections that leap forth in blocks in the neoclassical game of the first minutes of Moving. Forward in shifting time signatures, first in the woodwinds: nine, six, five quavers in the three-part legato melody of the woodwinds, with the pizzicati of the strings and harp as reinforcers of the sound of the pulse. It may not be intentional, but now comes a flashback to Stravinsky's neoclassical Psalm Symphony, launched into the lake of sound with a similar vision of sonority: the beat on the bass drum and timpani as an initiatory trampoline bound. The brass takes over as a four-part block in shifting duple metres, the woodwind and brass join voices, and gradually the string front grows to a power factor with a striking duple rhythm in opposition to the triple rhythm of the winds. This is the first wave, which is thinned out with a small parade of more soloist activity, and the next wave sets in with an unequivocally duple basic measure. This is where the unison ‘big tune' unfolds in the spacious breathing of the winds; the cool jazz phrasing is present, but more and more friction is coming from elsewhere with the usurping semiquaver rhythms of the strings. The culmination resembles the big band's chaotic tutti explosions, raw and tight, a long juicy confrontation between duple and triple metre.

Walking is a slow passacaglia, and the title refers to the ‘walking bass' of swing music, but by no means with the four heavy beats to the bar - on the contrary, it is in the spirit of Monk with many pauses and shifting times. It begins quite as expected in the depths with cello and double-bass, but gradually ramifies quite wildly into the rest of the orchestra. One soloist after another is manifested across this straying bass-line where one is particularly fascinated by the contra-bassoon's Fafner-like exclamations and the bassoon's affinities with Dexter Gordon's unruly tenor sax.

Flying might be a nod to Benny Goodman's Flying Home, and the speeded-up finale starts with a scene of jubilation in the now-conquered and truly flying 3/4 time. These 36 bars are in fact just an intro to an extended collective improvisation, with the solo violin as pilot. The woodwinds succeed one another in undulating rhythmic perpetual motion, and the brasses and strings cut in momentarily with edgy fourth-based chords like a blow-up of Monk's left-hand work. All this leads on to dizzying melodic concourses in the three blocks of the orchestra, each laid out in its own ‘thickened line'. In time the differences are evened out, the instrumentation becomes brighter, the strings take over the stage - until the low-key luminous coda. A new version of ‘the big tune' swings its way up into the woodwinds, and after several intermediate phases the work ends with a simmering, ever-fainter fade-out.