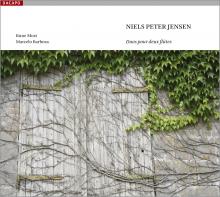 Niels Peter Jensen was a flautist, organist and composer. He was born in Copenhagen in 1802, the son of a poor blacksmith. As a baby he contracted an eye infection and almost lost his sight. In his boyhood years he could still make out enough with one eye to learn to read, but when he was 10 his vision failed completely. Fortunately for Niels Peter Jensen, he was admitted into The Royal Institute for the Blind. Here he was educated in the instrument of the flute.

Niels peter Jensen made his debut as a soloist with the Royal Danish Orchestra in a charity concert at the age of 15, which was a great success. He was among other taught by some of the leading lights of the musical scene like August Wilhelm Hartmann, who taught him the organ and Friedrich Kuhlau, who gave him lessons in music theory. In 1838 Niels Peter formally applied for the post as organist at the Skt. Petri Church and with support from the great names of musical life, including the composers Weyse, Claus Schall and his own teachers Kuhlau and August Hartmann, the post was his. This was the first time a blind man was given an official post in Denmark. Niels Peter Jensen also taught music and his pupils included important composers like Herman Løvenskjold, known for the music for the ballet La Sylphide, and J.P.E. Hartmann, whom he taught instrumentation.

Already in his teenage years N.P. Jensen was composing a good deal. In 1820 he had a cantata with a text by the great pastor-poet B.S. Ingemann performed, and Adam Oehlenschlæger came to see him in person to propose a collaboration, and in 1827 this led to the Viking play The Varangians in Constantinople and later to a number of cantatas. The largest work Niels Peter Jensen wrote for the Royal Danish Theatre was the singspiel Robinson, a Danish version of the tale of Robinson Crusoe. The production was chosen to open the theatre season of 1834, but folded after just three performances. Of instrumental music Niels Peter Jensen wrote a symphony for organ and winds and a large quantity of piano music, including sonatas and a range of variation works and fantasias. Most of his works, however, are for flute. His Flute Concerto in A minor is a striking work lasting over half an hour, first performed in 1830. To these we can add two sonatas op. 6 and op. 18, fantasias and variation works as well as many duets and trios. For a mixed ensemble he wrote among other works a Trio for Flute, Cello and Clarinet, a Quintet for Flute and Strings and a Trio for Flute, Violin and Viola.

Niels Peter Jensen died at the age of 44 in 1846, leaving his two-year-older wife Louise, who was also blind, and their daughter Ida. Several of Jensen’s flute works had been published, especially by German publishers, and in this way his name was kept alive for some years. In the twentieth century, however, his music was almost completely forgotten.