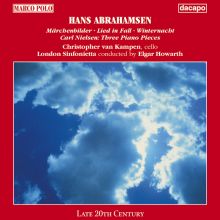 Christopher van Kampen enjoyed a highly varied career as a cellist. Having read mathematics at King's Collage, Cambridge, he entered the Royal Academy of Music as a pupil of Douglas Cameron, and in his first year was a finalist in BBC Cello Competition. At the age of twenty-four he was invited to become principal cello of the Royal Philharmonic Orchestra, a position he held for three years. He has held the position of Principal Cello with the London Sinfonietta since the early seventies, and has appeared as soloist with most of the leading British orchestras. He was a specialist in contemporary music and collaborated, as soloist under their batons, in works by Luciano Berio, Hans Werner Henze and Sir Michael Tippett. Premieres he gave included Hans Abrahamsen's Lied in Fall (a work written especially for him) in 1988, and in 1990 the UK premiere of H.K. Gruber's Cello Concerto, which he also played at the 1991 Proms. In May 1994 he gave the London premiere of Mark-Anthony Turnage's Kai with the Sinfonietta. He has also performed Britten's complete works for solo cello at the Wigmore Hall, and both Shostakovich concertos in one concert at St. John's, Smith Square. He was also closely associated with John Tavener's The Protecting Veil for cello and string orchestra, which he has also played many times in the UK and abroad, including at the 1992 Aldeburgh Festival with the London Sinfonietta.
His solo recordings ranged from works by Janácek, Hindemith, Debussy, Kurt Schwertsik, Tim Souster and Nicola LeFanu, to Schubert's String Quintet (with the Fitzwilliam Quartet). He also recorded numerous works as a member of the Nash Ensemble.
randomness