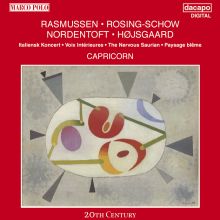 The ensemble was formed in 1973 as a quartet for a performance of Messiaen's Quatuor pour la Fin du Temps. The ensemble remained together and soon expanded to include several other players. Since receiving outstanding reviews for its London debut performance in 1974 Capricorn has established itself as one of the foremost British chamber groups. Right from the very beginning the players have performed an exceptionally wide range of music, the repertoire extending from the classical era to the present day.
They have given premieres of many new works and have commissioned pieces from several composers including Simon Bainbridge, David Bedford, Edison Denisov, Zsolt Durkó, Bernard Rands, Robert Saxton and notably Danish composers Erik Højsgaard, Anders Nordentoft, Niels Rosing-Schow and Poul Ruders. For large-scale works Capricorn has been joined by conductors such as Mark Elder, Lionel Friend and Oliver Knussen. The ensemble appears regularly in London and has taken part in many series at the South Bank Theatre, including Summerscope, Endgames, Beethoven Plus and Revolution Revisited.

A series of Scandinavian music in 1987 marked the beginning of a close relationship particularly with Danish music. Capricorn has performed throughout Britain and since winning a special prize at the Gaudeamus International competition in Rotterdam the ensemble has toured most of continental Europe. The ensemble has recorded well over one hundred works for the BBC and particularly recordings of works by Glinka, Rimsky-Korsakov, nonets by Stanford and Parry and septets by Hummel have received tremendous critical acclaim. Henrik Vagn Christensen conductor

Henrik Vagn Christensen made his debut from the soloist class at the Royal Danish Academy of Music in 1994 with the Tivoli Symphony Orchestra. He has already had a prolific career, for example as guest conductor of the Danish regional orchestras. In 1996 he made his debut outside Denmark as conductor of, among other ensembles, the symphony orchestras of Malmö and Helsingborg in Sweden, and the Norwegian Opera in Oslo. He has also been engaged by the Royal Theatre in Copenhagen for a number of productions. Since 1995 Henrik Vagn Christensen has conducted the Danish Chamber Players in several concerts and CD recordings.