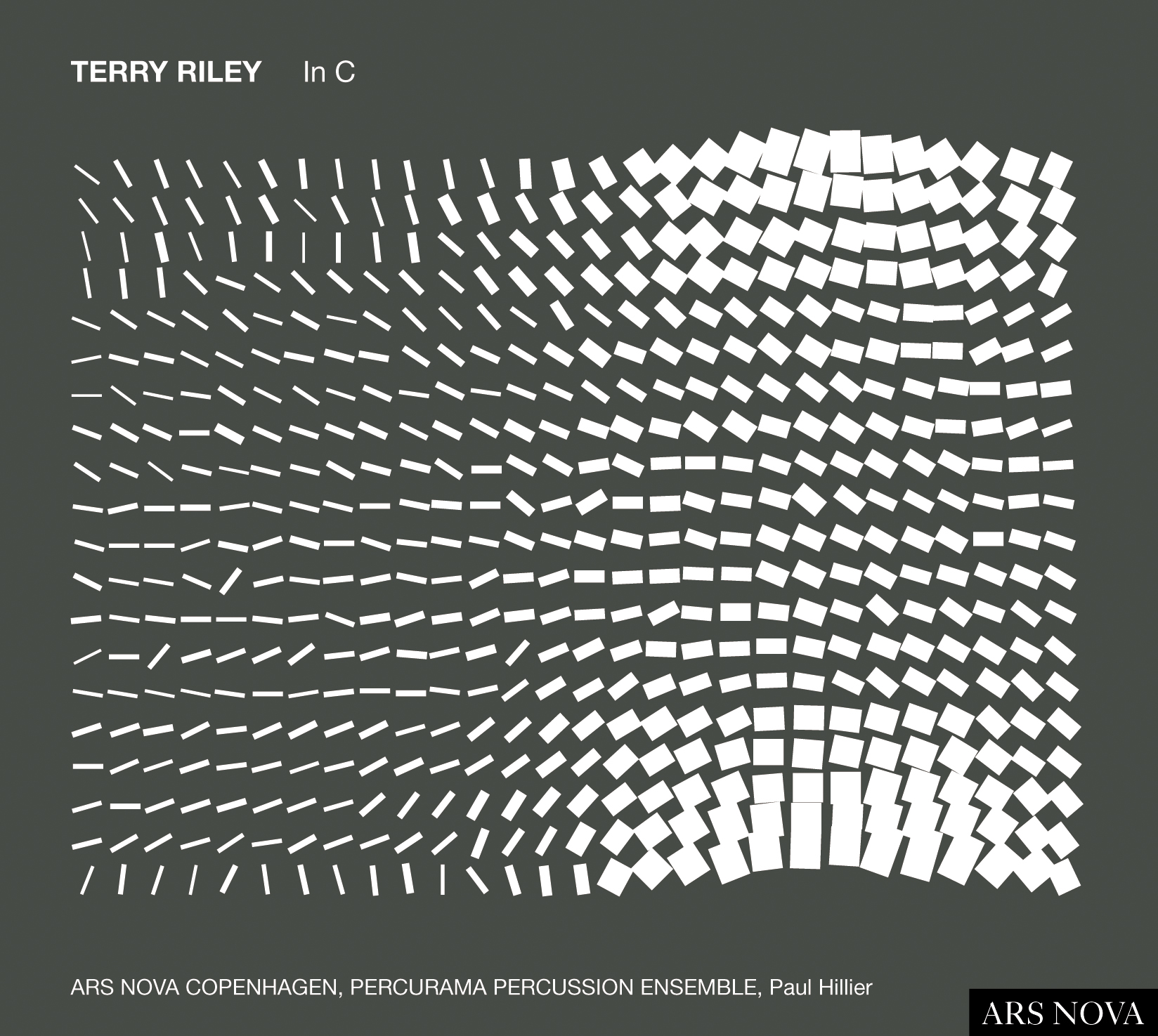 "As an idea, the piece is free, boundless, big-and-small, and it still manages to be nothing but itself"
Elena Saavedra Buckley, WQXR (New York)
SELECT PREFERRED FORMAT TO DOWNLOAD SINGLE TRACKS.
Total runtime:
55 min.
CategoryID:
6CED07D5-C2AF-4E6E-A05D-A2EF919E5AF8

If I had to choose two musical works to represent the 1960s, they would be Terry Riley's In C (1964) and Karlheinz Stockhausen's Stimmung(1968). These two iconic masterpieces continue to be performed, though they're often greeted condescendingly with cries of  ‘ah, the 60s'. The two composers could not be more radically different, and yet through these two works (which by coincidence, forty years on, I am recording around the same time1), two separate strands of modern music briefly crossed each other's path. Their brief symbiosis was made possible not only by the times, but also a particular place, California, where so much of the 60s seems to have taken place. I don't mean to suggest any conscious connection between these two composers, but I find it more than coincidental that those times and that place did produce two works, brightly emblematic of their common origin, and in some respects surprisingly similar in their methods and ideals.

Both works are fundamentally tonal. Not only tonal, but defiantly so, the sheer force of tonality becomes the bedrock of the message they proclaim. To call a work ‘In C' was already a statement against the agon of 1960's modernism, as represented by Boulez and, um, Stockhausen. Stockhausen himself raised more than a few eyebrows when he produced in Stimmung, a work full of hippyish references, based on a single chord - the harmonic series extending upwards from a low Bb - and thus articulating again and again the very essence and epitome of what tonality is made of.

But the similarities continue. Each work lasts for about an hour, and each work calls for improvisation based on a series of about fifty models. Furthermore, the use of improvisation arises from a mixture of social, humanistic, and spiritual ideals about the purpose and nature of music-making which both composers clearly held at that time (and, in their very different ways, still do) and which in both cases is linked to a profound interest in eastern religion.

Thereafter, one has to admit, the differences set in. But the similarities, and the implications of these similarities, are powerful and are finally being worked out in the music of some of today's younger composers.

Terry Riley is a Californian composer, born and bred. He is thus from one of the few places in the U.S.A. where it is still possible to discern a regional accent even in the local mainstream culture. He lives in the same region where he was born, in the foothills of the Sierra Nevada, from where it is downhill all the way west across the Central Valley, passing Sacramento (the State Capitol) and Davis (a university town where I lived for six years in the 1990s), ending up in the San Francisco Bay Area, and the Pacific Ocean.

For some people California is an ending, where the westward exodus stops. For others it is a jumping off point to the Orient, one whose relationship with Asia and Oceania was distinguished by not having to be mediated through Europe, either physically or psychologically.  It was there that I first met white people who had been to Asia but never to Europe, in fact never even to New York. To a European this can be strangely refreshing.

One of the most significant aspects of Riley's musical life has been his association with Indian classical music. Through the influence of his friend and colleague La Monte Young, he started to take an active interest in the work of Pandit Pran Nath, an Indian singer in the Kirana tradition. They met in 1970 and Pran Nath told him that he should become his disciple. He did, and many visits followed, in both directions. Pran Nath remained Riley's guru until his death in 1996. This kind of long-lasting and profound study in a traditional master-disciple relationship is something that our own music tradition now, sadly, almost entirely lacks. It's a very personal relationship when you study under your masters...You don't come for a lesson once a week - you work very closely because it's a responsibility on both persons' part. You have to devote your life to it.\2

I had the privilege of seeing this relationship in practice when I invited Terry to perform an evening of ragas at the Theatre of Voices Festival in January 5 (then based at the University of California, Davis). Having agreed to appear, he later informed us that he would be bringing Pandit Pran Nath with him. This entirely altered the flow of the evening, as indeed it should, and the audience was witness to something more than simply a concert of Indian music.  Shortly afterwards I drove up to Terry's house in the foothills with a mutual friend, Shabda Owen, who was to help me record Terry's contribution to a John Cage CD I was planning.3He had cooked us a very fine curry which we washed down with Italian grappa. I remember that the house was lovely, though I had no sense of the view or distances because everything was shrouded in thick mountain mists.

Although this part of his life postdates the composition of In C, the path that he took is prefigured in the nature of that famous work. Music is about the relationships between people as well as the relationships between sounds. David Harrington of the Kronos Quartet, agreeing that one couldn't write about Riley without discussing In C, added: "It's the same way you can't talk about Stravinsky without discussing The Rite of Spring ... In C is an idea about life, about making music together and about community. It's so simple and yet so profound, it always sounds right and it always sounds different."4

IN C is a sequence of fifty-three motifs or modules varying in length from a single note to a sustained melodic fragment. Some of them circle closely around the central pitch of C, while others move further away. There is no modulation, however, but rather a migration focusing on different core pitches in relation to C, and, with the introduction of the chromatic pitches F# and Bb, a shift of mode from C Ionian (the equivalent of C major) to C Lydian and C Mixolydian. The modal identity becomes more ambiguous about two-thirds of the way through the piece, when B and Bb and F and F# jostle together in the longest module.

Throughout the work one has the sense of something unfolding organically. Most of the motifs are developments of what has just been heard, even as they begin to mutate in a new direction, while others make a more immediate contrast, usually of a rhythmic nature. Everyone performs the sequence in the same order from beginning to end, but repeats motifs as many or as few times as they choose, may take rests, and may move on to the next motif as and when they feel it's right to do so. This very quickly creates a micropolyphonic texture of extraordinary subtlety, though in a successful performance this potential for natural exuberance has to be tempered with a willingness to simplify and even fall silent from time to time.

The mixture of note to note precision (there's no suggestion of improvising additional notes or rhythms, only using what's there) contrasts with the overlapping of melodic and rhythmic modules; in effect the performers are being invited to create polyphony on the spur of the moment, which means they must listen and respond, allowing the texture to expand and contract, in short to breathe; all this gives the work a very special quality and status.

Most earlier performances (and there have been many, including even a recording by a Chinese orchestra) have been given by mixtures of instruments, sometimes including a few singers, sometimes not. Influenced by my own background in a cappella vocal music and my card-carrying, minimalist predilection for families of like timbres I had always been less than satisfied with these versions, in which the individual lines remained so distinct. This is purely a matter of taste of course, but for me polyphony is more interesting when the range of timbres is limited, so that the ear can focus on the resultant patterns at least as much as the individual lines. I therefore saw that an all-vocal version would be the thing to aim at, using only a small group of mallet instruments in support, primarily to provide the pulse normally played as a high C on a piano.  I discussed this idea with the composer (also around 1995) and he very much encouraged it and sent me a version of the score in which the notes were underlayed with ‘sacred syllables' for the singers to use. He also suggested that a certain amount of vocal scoring would be a good idea, thus planning some groupings of the singers rather than leaving that entirely to chance. Although my plans to perform the work did not come to fruition at that time, I put each of these ideas to work when the opportunity did finally arise, here in Copenhagen, more than ten years later.

In fact we use two distinct timbres: voices and mallet instruments, and I believe the result is a delight as sheer sound. The pulse is played on a single marimba - the purpose of it is to hold things together, though it also acts as a pitch reference for the listener as much as the performer. Curiously though, the pulse was not part of the original conception and is not absolutely essential (as the listener will hear, we've taken advantage of this at one point).

Encouraged by the composer's own performance notes, we have taken to heart his notion of treating the motifs to various polyphonic processes: octave transposition, proportional augmentation and diminution, melodic inversion and retrograde - all familiar ground for performers of gamelan as well as medieval music, such as those playing and singing here.

Everyone involved in this recording deserves recognition for their creative contribution, but special mention is due to Gert Mortensen - leader and teacher of a new generation of percussion players, to Gert Sørensen - creative and immensely supportive sound engineer, to Ivan Hansen - for overseeing the preparation and bringing the ensembles together, to Denise Burt - for her superbly elevated design, and to Tom Welsh - for expediting certain matters. Final and overall thanks go of course to Terry Riley.

Our photo album should have included pictures of everyone as they were in 1964, but most of them weren't even born yet!