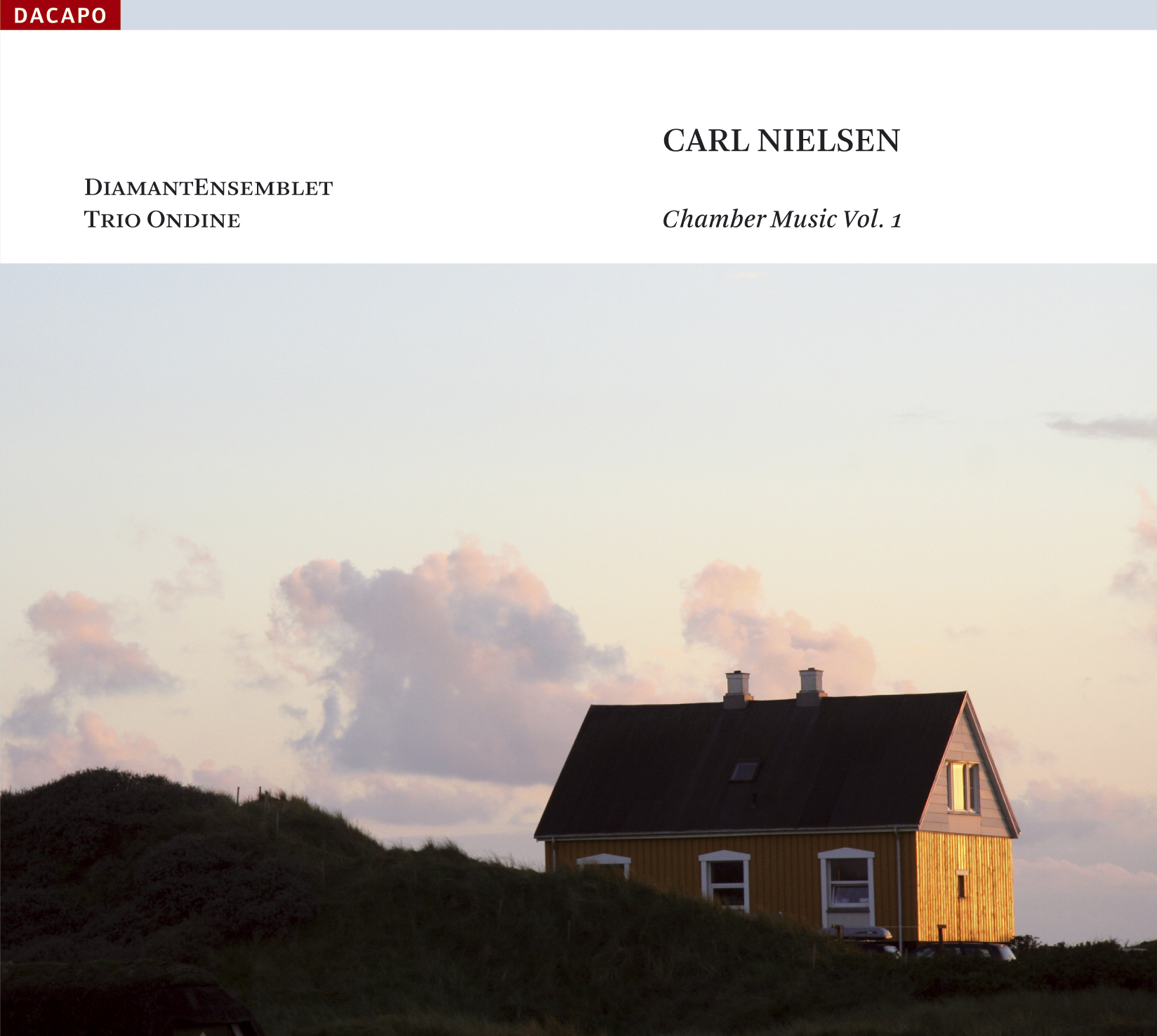 What elevates a composer above the generality of colleagues who have in all ages vied for the favour of the public; and in the longer term, what makes him survive the merciless judgement of time? A good deal of the answer must be that the composer's music has a personal profile that makes it recognizable among all the others who only accommodate the tendencies of the age without adding individual features.

Composition has an element of sheer craftsmanship that has to be acquired, and in this respect is it surely natural that the learning process starts with the already generally acknowledged idioms of the past. A composer's development will therefore usually progress from youthful, perhaps even child-like imitation to the degree of individuality which in the final analysis - one hopes - becomes crucial to the composer's reputation. In that respect Carl Nielsen is no exception, and the present CD fully confirms this with its stylistic range, from the very early Fantasy Piece for Clarinet and Piano (c. 1881) to a mature work like the Wind Quintet (1922).

Nielsen was of course himself aware of this development, and the Fantasy Piece is therefore not numbered among his official oeuvre, which only begins a few years later with the Suite for Strings, published in 1888 as his opus 1. If we were to point to a stylistic model for the Fantasy Piece, it might very well be the most famous Danish composer of the preceding age, Niels W. Gade. This is all the more likely as Nielsen's manuscript bears the very motto from Uhland (Formel hält uns nicht gebunden, unsre Kunst heißt Poesie") with which Gade had furnished his breakthrough work, the overture Echoes of Ossian. The Fantasy Piece is dedicated to an M. Hansen, who - we must assume - was a regimental musician in Odense, as young Nielsen himself was. However, since he had several colleagues to whom the designation could apply, we shall probably never clear up the exact identity behind this, Nielsen's earliest dedication.

With the Two Fantasy Pieces, opus 2, for oboe and piano, we have passed through Nielsen's academy years in Copenhagen (1884-86) and entered into his official composing career. The tone has now become more personal, and the dedication also aspires higher, for Olivo Krause (1857-1927) had been a much-prized oboist in the Royal -Danish Orchestra since 1882, seven years before Nielsen himself won a place in the Orchestra and became his colleague. Nielsen was aware that he was still a fledgeling composer, so prior to the first performance and publication in March 1891 he had sent the manuscript to his theory teacher from the Academy, Orla Rosenhoff (1844-1905), who had suggested a few alterations in the piano texture.

The genesis of the Canto serioso is also related to the Royal Orchestra: in April 1913 there was to be a competition for a vacant hornist position, and for the occasion Nielsen, now a conductor at the Royal -Theatre, composed this short, beautiful piece, which was only printed after his death, but of course immediately written out in (at least) six copies for the use of the applicants. The piece makes particular use of the low register of the french horn, which is hardly surprising, since the Orchestra was looking for a fourth horn (in a classic orchestral horn section of four it is the second and fourth horns that play the lower parts). The competition was won by the just 23-year-old Martin Christian Sørensen, who like Nielsen had a background as a regimental musician - in Sørensen's case, though in the Band of the Life Guards.

For several years the double-bassist Ludvig Hegner (1851-1923) from the Royal Orchestra was responsible for a summer tour to the Danish provinces, where, along with some of his colleagues from the orchestra, he entertained a music-hungry public that otherwise had few chances of hearing chamber music for large mixed ensembles of strings and winds. In 1914 Hegner was to go on tour with a programme of among other works Beethoven's Septet, and he asked Nielsen for a shortish piece whose maximum ensemble was that of the Beethoven work. So Nielsen came up with this little ‘unavailing serenade', Serenata in vano, which did however make use of five of the seven instruments.

It was first performed in Nykøbing Falster on 3rd June 1914 and was apparently composed and rehearsed in great haste in the week preceding the first performance. But what might easily have become no more than an occasional composition of no lasting value nevertheless passed the test of time. Nielsen himself described it as a joke: "The gentlemen first play a little chivalrically and impressively to lure the beauty out on to the balcony, but she doesn't show herself. Then they play a little touchingly (poco adagio), but that doesn't help either. Then when they've played in vain (in vanno [sic!!]) they give up caring about the whole business and ‘shuffle off' home during the little final march that they play for their own amusement."

The three extracts from Nielsen's stage music for Helge Rode's The Mother were not originally chamber music, only thinner-textured passages in a very large orchestral score. The play was the Royal Theatre's celebration of the reunification of part of South Jutland/North Schleswig with the old Danish Kingdom in 1920. However, the piece was not premiered until January 1921, and was a considerable success with a total of 31 performances over two seasons. There was an unsuccessful attempt to revive it in 1935, and it could hardly be performed today. It is far too uneven stylistically and too closely tied to the patriotic emotions that the Reunification naturally prompted.

"Tågen letter" (The Fog is Lifting), which has since become one of Nielsen's most popular compositions, describes exactly what the title says: since the fog no longer hides the landscape, it forms the setting for a highly symbolic scene where ‘Mother Denmark' must say farewell to her South Jutland son, whereupon a wall of ice suddenly rises and separates them. Now the two allegorical figures, Faith and Hope, appear. They play their little march-like duo when they are first confronted by the ice-wall. In the scene with the playing children it is Hope who accompanies their game after first helping them to find each other, since they come from each side of the wall.

The original inspiration for the Wind Quintet was a telephone call at some point in the autumn of 1921 to Nielsen's friend, the pianist Christian Christiansen (1884-1955), who was just then sitting practicing Mozart's Sinfonia concertante with four of the five members of the Copenhagen Wind Quintet. Christiansen took the phone while the winds continued to play. Nielsen heard it and asked if he could come over and listen. There he heard how Mozart - not least in the set of variations in the last movement - underscores and plays with the character of the simple instrument. Shortly afterwards he told the oboist of the quintet, Svend Christian Felumb (1898-1972), that he would like to write a quintet for them.

On 1st February 1922 he went to Gothenburg, where he had an engagement as a conductor. There he went to work composing. In March he was in Bremen conducting his own works, and in Copenhagen for a Music Society concert, where he conducted among other works Berlioz' Symphonie fantastique, in which Felumb played the large cor anglais solo behind the scenes. In the middle of the night after the concert, Nielsen called Felumb to ask if it was possible for the oboist to switch to the cor anglais during a work. Felumb said yes - and ever since oboists all over the world have cursed having to change to cor anglais in the expressive prelude of the last movement, then back to the oboe in the variations on Nielsen's own hymn melody Min Jesus, lad mit hjerte få (‘Oh Jesus, let my heart acquire a taste for you').

Back in Gothenburg he carried on writing the quintet, and at the end of April it was finished. It was played for the first time privately on 30th April, at the house of his friends the Mannheimer family. The first public performance of course took place back in Copenhagen on 9th October 1922 with the ensemble for whom the work was written: besides Felumb, the flautist Paul Hagemann (1882-1967), the clarinettist Aage Oxenvad (1884-1944), the hornist Hans Søren-sen (1893-1944) and the bassoonist Knud Lassen (1854-1938).

When Nielsen composed his Wind Quintet, the genre was only then being rediscovered after hardly having been cultivated since classics like Reicha and Danzi. At exactly the same time as Nielsen, Paul Hindemith (1895-1963) wrote his considerably more neoclassical Kleine Kammermusik no. 2, and the next year Arnold Schoenberg began his Wind Quintet and his pupil Hanns Eisler (1898-1962) his Divertimento, opus 4. Both the latter, unlike Nielsen's work, were atonal, yet in their transparent treatment of the instruments they are closer to Nielsen than to Hindemith. However, none of them has become a repertoire work to the same extent as Nielsen's.

It may be that the Dane's experiment with unaccustomed colourings and extended solo passages stemmed partly from a wish to write music that suited the individual temperaments of the five musicians who gave the work its first performance - indeed to some extent it portrayed them. That has not prevented wind quintets all over the world from playing and recording this modern wind quintet classic.