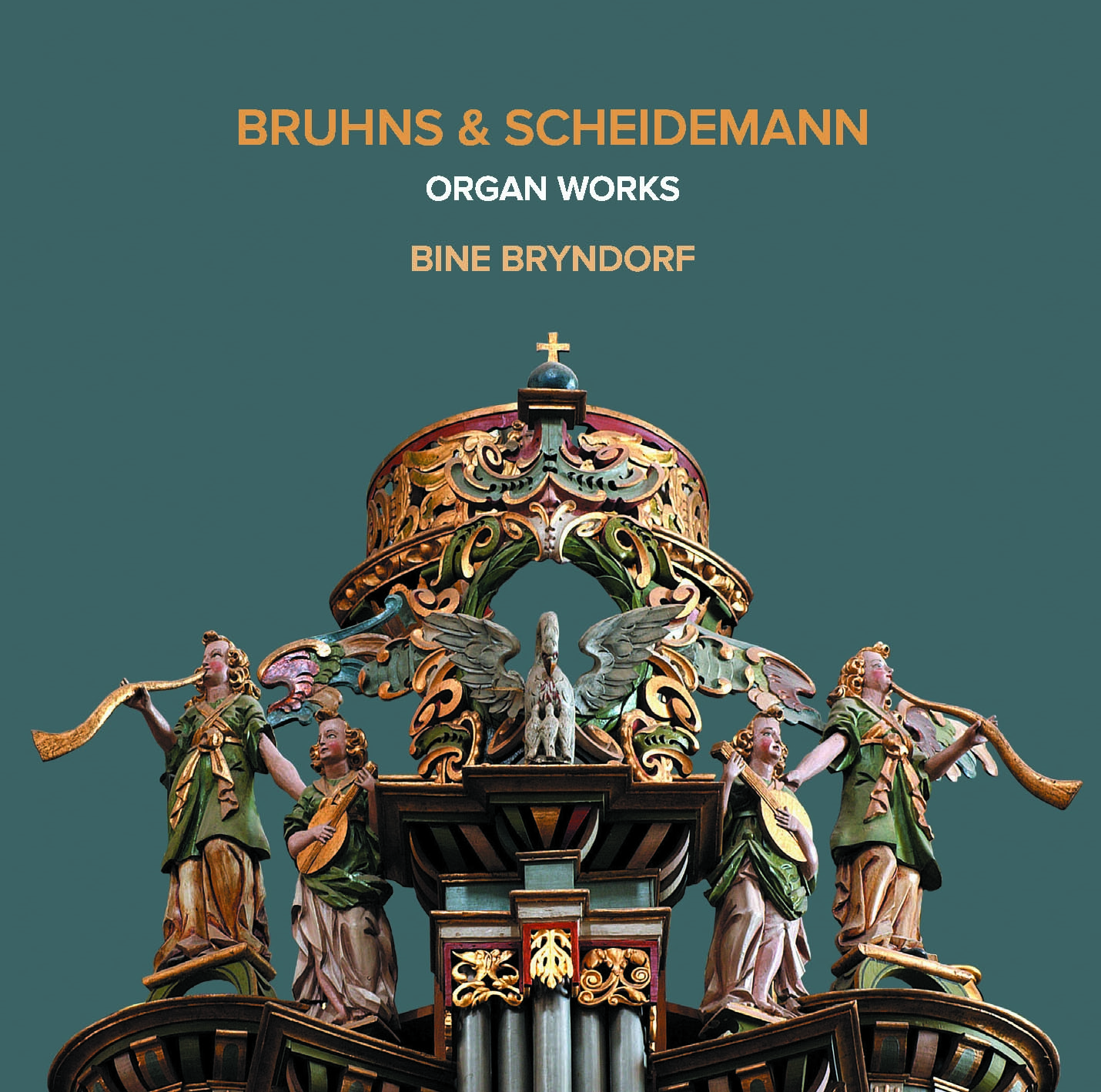 One of the golden ages of the organ repertoire is undoubtedly that of ‘the North German School’; Baroque music from the northern German/Scandinavian area composed in the time around 1600-1700. The composers Heinrich Scheidemann (c. 1591-1663) and Nicolaus Bruhns (1665-1697) can be seen as the representative figures of the beginning and end of the period; Scheidemann as one of the founders of the school, Bruhns as its last great composer. The composers of the North German organ school were influenced first and foremost by Jan Pieterszoon Swee­linck (1562-1621) and the Netherlandish organ tradition. But equally important was the influence exerted by the great northern German organs with their many manuals and their highly developed pedals. Alternate playing on several manuals and virtu­osic pedal playing are typical features. The school had its centre in the old Hanseatic cities, especially Hamburg and Lübeck, but it also had connections with Denmark and Sweden.

Heinrich Scheidemann was born in Wöhrden in Holstein. His father was an organist, first in Wöhrden, then at the Sct. Katharina Church in Hamburg, one of the city’s four main churches. The parish council in Hamburg paid for Scheidemann’s studies in Amsterdam from 1611 until 1614. He studied with the most famous organist and teacher of the age, J.P. Sweelinck. At the end of his studies Sweelinck dedicated a canon on the Latin hymn Ave maris stella “in honour of Heinrich Schei­de­mann”. Around 1625 Scheidemann succeeded his father in the post of organist at the Sct. Katharina Church in Hamburg. There, shortly afterwards, he had the choir organ expanded, adding a fourth manual made by the organ-builder Gottfried Frietzsche (1578-1638). The organ had thus become one of the largest and most modern in northern Germany, on which Scheidemann could fully demonstrate all that he had learned in Amsterdam and develop his own organ style. Scheidemann became an important teacher and the founder of the North German School. Among others, he taught Matthias Weckmann (1619-74) and Johann Adam Reincken (1640-1722) – perhaps also Reincken’s good friend Dietrich Buxtehude (1637-1707)? In Grundlage einer Ehrenpforte (Hamburg, 1740) Johann Mattheson writes of Heinrich Scheidemann: “Scheidemann was friendly and accommodating, free and happy in his relations with others, and had no great airs about himself. His playing was in the same vein, quick-handed, cheerful and clear, well grounded in the composition.” Elsewhere he speaks of Scheidemann’s playing as full of “Lieblich­keit”, grace and liveliness.

Apart from a couple of works for harpsichord and for song and continuo we only have organ works from Heinrich Scheidemann. On the other hand there is a large and varied oeuvre here, consisting of chorale settings, Magnificat verses, motet intabulations and free works. Fragments of Scheidemann’s works have survived in among other places a manuscript from Clausholm Castle near Aarhus. For this recording I have selected five works to demonstrate his organ art. Praeambulum in G explores the organ’s majestic sound on all three manuals and pedals. Jesus Christus unser Heiland is a long chorale fantasia over Luther’s great Communion hymn. It features much playing on two manuals, where the chorale melody is empha­­sized in various ways with the wonderful reed stops of the Raphaëlis organ. In Fuga in d Scheidemann demonstrates many polyphonic techniques (stretta, augmentation, the combination of two themes), but at the same time combines this with arrays of quick figurations. Dic nobis, Maria is an intabulation – that is, a transcription of a choral motet by the Italian composer Giovanni Bassano (Venice 1598). Transcriptions of choral motets were among the Hamburg organists’ duties in connection with services in which the choir could not participate. In Dic nobis, Maria Scheidemann ornaments the choral writing with many figurations which in the most graceful way enliven the originally more block-like 8-part choral texture. Toccata in G in many ways recalls the great chorale fantasia Jesus Christus unser Heiland, but makes no use of any hymn melody. The toccata unfolds to a greater extent in echo effects and alternations where the hands change manuals virtuosi­cally. Both works are among the most complex, virtuoso and marvellous pieces from Heinrich Scheidemann!

Nicolaus Bruhns was born in Schwabstedt near Husum in Schleswig. He came from a large family of musicians; his father was the organist in Schwabstedt. In 1681 Bruhns moved to Lübeck, where he studied violin and viola da gamba with his uncle Peter Bruhns, and organ and composition with Dietrich Buxtehude. Mattheson writes: “In organ playing and in composition he [Bruhns] made special efforts to emulate the famous Dieterich Buxtehude; indeed he brought it to such perfection that Buxtehude recommended him to Copenhagen”. Presumably Nicolaus Bruhns was to study with Johann Lorentz, the organist at the Nikolai Church. In Copen­hagen Bruhns may have heard Lorentz’ famous weekly organ concerts and perhaps himself played one or more? He may also have had the opportunity to demonstrate his virtuoso violin playing at the court of the music-loving Danish King Christian V. From 1689 until his death at the age of 31 in 1697 Nicolaus Bruhns was the organist in Husum. Of Bruhns’ many-faceted talent Mattheson writes: “Because he was very skilled on the violin and knew how to play it with double-stopping, as if there had been three or four of them, he had the habit now and then of creating variation in his organ playing by playing the violin all alone in the most pleasant way and at the same time a well-fitting pedal part”.

A small handful of organ works by Nicolaus Bruhns have survived, as well as twelve cantatas. There are no autographs. Most of the copies come from the circle around J.S. Bach, who must have been a great admirer of Nicolaus Bruhns’ compo­sitional art! The preludes testify to Bruhns’ studies with Buxtehude. They have a similar structure to his, with alternations between free and polyphonic passages. But Bruhns goes further than Buxtehude, among other ways in his use of double pedals (the two large preludes in G and E) and in the long, virtuosic pedal solos of the free passages. Here the Late North German School demonstrates its distinctiveness; the pedal takes on an ever greater soloist character. Nicolaus Bruhns is also highly experimental in his rhythms, for example in the last fugue in the large E minor Prelude. The small Adagio is just a fragment. Perhaps it was a sketch for a passage in a larger work? Or else just a small composition exercise? The chorale fantasia Nun komm, der Heiden Heiland is divided into four sections corresponding to the four lines of the hymn verses and gives a musical interpretation of the content of the text. The hymn text is as follows in English:

Come now, Saviour of the Gentiles / recognized as virgin’s child; / all the world must wonder that / God ordained Him such a birth.

Here we see one of the clearest differences between the Early and the Late North German School: the wish to interpret the hymn text in music, not just to use the hymn tune as purely musical material; something that Bruhns probably learned from his teacher Dietrich Buxtehude.

THE RAPHAËLIS ORGAN OF ROSKILDE CATHEDRAL

A mere glance at the case of the Raphaëlis organ in Roskilde Cathedral, with its stylistic blend of Gothic, Renaissance and Baroque elements, is sufficient to suggest the instrument’s chequered history.

The beautiful Gothic canopy beneath the organ dates from around 1450. That an organ already stood here even at this early period may be inferred from the fact that instruments are attested in the cathedral’s archives for the years 1464 and 1484. In 1554 Herman Raphaëlis, a Dutch builder from Bolsward in Friesland, built a new organ on this canopy. All that remains of this instrument are the gallery balustrade, the Rückpositiv case and four stops. The Renaissance carvings were the work of Per Jensoen from Leeuwarden also in Friesland.

Exactly one hundred years later – in 1654/55 – Gregor Mülisch, a journeyman with the late Johann Lorentz (ob. 1650), began a thorough overhaul of the instrument: including a replacement of the entire case. Although the Renaissance Rückpositiv and gallery balustrade were retained, both were “modernized” with Baroque elements carved by the Roskilde woodcarver, Caspar Lubbecke. Mulisch succumbed to the plague in 1654 and his work was completed in 1655 by “Peter Orgelbygger” – probably the builder Peter Karstensen Botz of Viborg. The instrument now had three manuals (Rückpositiv, Manualwerk and Brustpositiv), a Pedal and 29 stops.

Few changes were made to the organ during the next many years, as it appears from a repair estimate of 1761 by the organ builder Hartvig Jochum Müller. He writes here that “the organ has never been repaired in more than 100 years”. Müller’s quote is extremely detailed and contains valuable technical information concerning the instrument. His tender turned out to be beyond the means of the Roskilde authorities, with the result that a local clockmaker was entrusted with the task of repairing the instrument.

An important development in the instrument’s fortunes occurred in 1833, when fundamental changes were made to its design: in order to enlarge the organ, it proved necessary to saw away the whole of the rear wall of the main case. The pedal pipes were now installed in the vault behind the organ, a move that later turned out to be extremely disadvantageous from both an acoustic and technical point of view. Furthermore, the Brustpositiv was removed and replaced by a small “Präludierwerk” with swell. Finally, the instrument was enlarged to 37 stops. This work was undertaken by the young organ builders, Jürgen Marcussen and A.P.W. Reuter, who had recently made a name for themselves with a large new organ for the Castle Chapel in Copenhagen. From the earlier instruments of 1554 and 1654, Marcussen and Reuter took over only the old Rückpositiv windchest, the case pipes (all of which date from 1654) and a fairly large number of internal pipes. In the process of rebuilding the instrument, the two builders made extensive notes that proved extremely useful at the time of its most recent restoration in 1988-91.

The organ was twice rebuilt in the twentieth century. In 1926 the stop list was increased to no fewer than 56 stops – almost twice as many as in 1654. Because of the confined space, the whole technical operation was extremely complicated, with the result that by the 1950s further restoration work had again become necessary. The 1926 action – part pneumatic, part mechanical – was now made entirely mechanical, and the stop list and voicing were retouched in a “Neo-Baroque” spirit.

By the early 1980s it had become clear that the organ needed to be restored once again: it could no longer be relied on to function technically; the old windchests had dried out, making it difficult to maintain the same pitch; and the sound was far from homogeneous.

As a result, the organ was examined by the Dutch organ specialist, Cor H. Edskes, between 1985 and 1987 and, on the basis of his findings, it was decided to restore the instrument to its 1654/55 state. It was realized that there was no future to the course adopted since 1833 – constantly enlarging the instrument. The principal aim of the reconstruction was to allow the valuable old pipework of 1554 and 1654 to be heard once again in its historical context. The work was carried out between 1988 and 1991 by the firm of Marcussen & Søn, following the plans and acting on the advice of Cor H. Edskes. The voicing of the instrument was undertaken by Olav Oussoren.

Music flourished as never before in Denmark during the seventeenth century, especially during the reign of Christian IV (1588-1648), when eminent musicians such as John Dowland, Heinrich Schütz, Melchior Schildt and Matthias Weckmann held appointments at court. The Raphaëlis organ in Roskilde Cathedral is the only instrument of any size in Denmark that still contains substantial material from this great past. With its gentle, graceful sounds it adds a significant facet to the Northern European organ landscape.