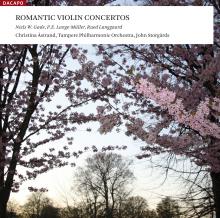 The Tampere Philharmonic Orchestra, comprising 97 musicians, is one of Scandinavia's foremost symphony orchestras. In 2005 the orchestra celebrated its 75th anniversary.

In 1990 with the completion of the Tampere Hall, a superb concert hall and congress centre, the orchestra literally moved into a brave new world. Vastly improved premises, including a concert hall with a seating capacity of 1,800 gave scope for the orchestra's further artistic development.

During the winter season there is a series of Friday symphony concerts and a chamber music series Afternoon of Fauns on Sunday afternoons once a month. The orchestra also acts annually as an opera and ballet orchestra and plays regularly at the Tampere Biennale contemporary music festival.

Educational projects and other events for young people are also one of the characteristics of the Tampere Philharmonic Orchestra. It is the first orchestra in Finland with its own club for young listeners.

In recent years the orchestra has recorded mainly for the Ondine label, with conductors such as Eri Klas, John Storgårds, Tuomas Ollila and Leif Segerstam. So far 40 recordings have been launched on national and international markets. The most recent of them include music by Jukka Tiensuu, Jouni Kaipainen, Einar Englund, Peteris Vasks, John Corigliano, Alma Mahler, Leo Brouwer, Robert Schumann and Jean Sibelius.

The Tampere Philharmonic Orchestra has so far undertaken international concert tours to Scandinavia, Estonia, Germany, the Netherlands and Spain and the United States. During the autumn season 2007 the orchestra gave a succesful Sibelius anniversary concert in Dortmund and undertook its debut tour in Great Britain visiting London, Croydon, Birmingham and finally Utrecht, the Netherlands.

Founded in 1930, and maintained since 1947 by the City of Tampere, the orchestra’s initial reputation for competence as a professional orchestra was built up during the 37 years it was conducted by Eero Kosonen. Since then the orchestra has distinguished itself through its performances of Finnish music, notably under the baton of Paavo Rautio, its conductor from 1974 to 1987, with whom the orchestra made a tour in the USA in 1987. Regular recording got under way during the period 1990-1994 with Leonid Grin as artistic director. Bold and pioneering programme design was the trademark of Tuomas Hannikainen (Ollila), artistic director 1994-1998.
randomness