Morten Olsen's 'Be My Quiet Friend' is an album of paradoxes. It took more than ten years to produce, but it is based on moments. It makes use of improvisation and lets the musicians play “whatever occurs to them,” but has been trimmed, edited and manipulated ad infinitum. Certain passages are entirely improvised, while others were written out in detail. And the triumph is that it is in fact pointless to try to distinguish between the two... 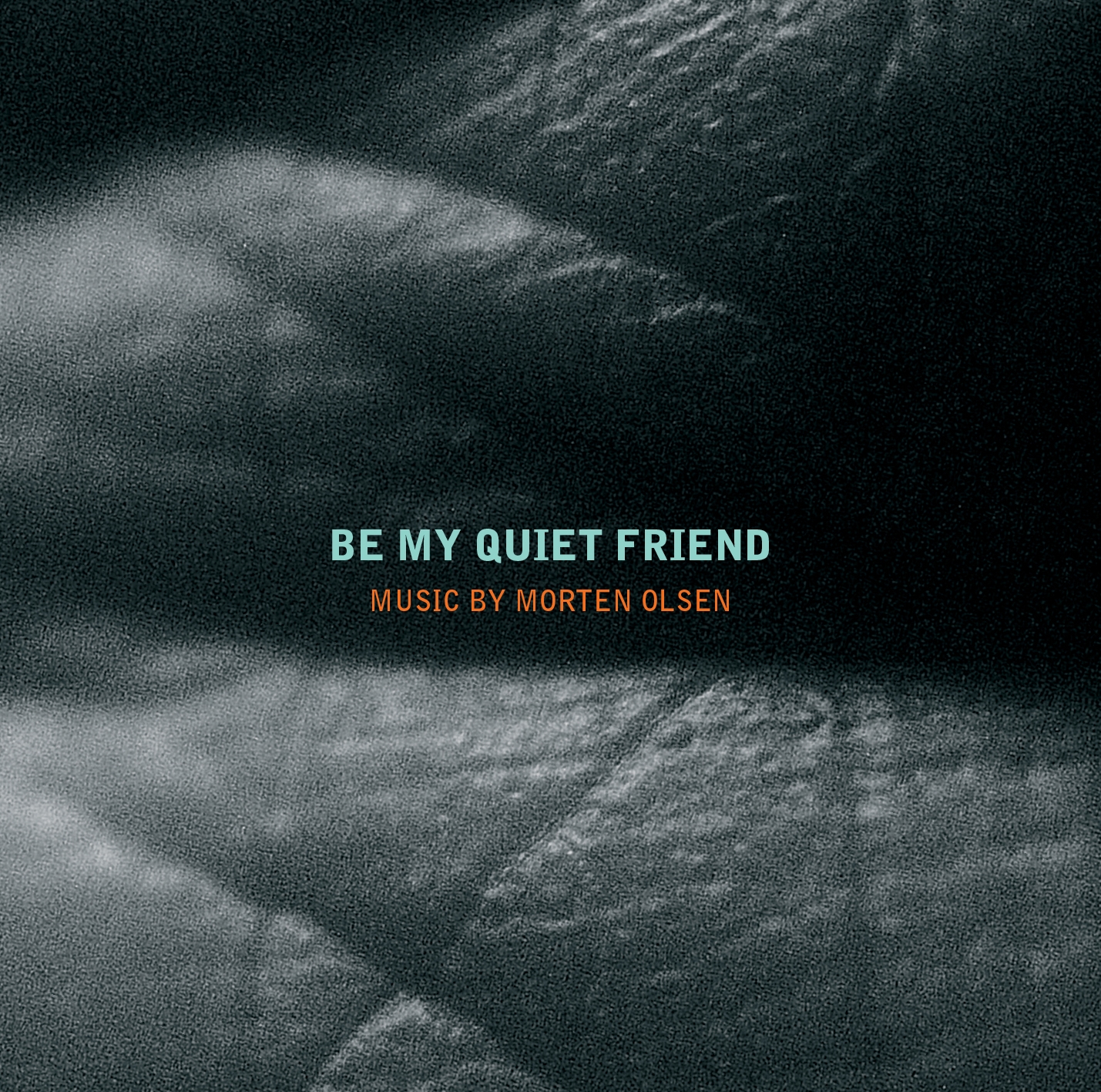 Morten Olsen’s ‘Be My Quiet Friend’ is an album of paradoxes. It took more than ten years to produce, but it is based on moments. It makes use of improvisation and lets the musicians play “whatever occurs to them,” but has been trimmed, edited and manipu-lated ad infinitum. Certain passages are entirely improvised, while others were written out in detail.

And the triumph is that it is in fact pointless to try to distinguish between the two.

For Morten Olsen ‘Be My Quiet Friend’ is a return to his youth as a fusion musician. But it is also a culmination of his work as a composer. As a reaction to the experience of a concert that was “campfire songs, arranged and complicated so they sounded like composition music,” he decided to do the opposite.

It is over ten years since he decided to make a kind of music that finds its very DNA in the uncompromising and complex, but which then permits itself to be produced and recorded so it becomes seductive.

“I insist that music must seduce me,” he says. No matter whether it is Miles Davis, György Ligeti or Pelle Gudmundsen-Holmgreen, their methods do not get in the way of the music. Their new departures and discoveries are in reality discoveries of their own musical personalities.

With ‘Be My Quiet Friend’ Morten Olsen has set out to find a musical stance that is not bound by any conventions. Music that can contain both complexity and sensitivity.

Music that can do it all.

What is it that we hear?

From the first note it is clear that something is not as it usually is. That the language is different. That the pantheon that always watches over the birth of a new work is an alien one. That the group of musical gods and spirits that bless a continuation or renewal of the tradition is composed of personages quite different from the usual ones.

So what is ‘normal’ in this context? If what is called contemporary composition music has established anything in the course of the past seventy years, it is surely that the word ‘normal’ is undesirable. That the new departure, the fresh and innovative – rather than the normal – is always the guiding principle.

All the same, it is obvious that Morten Olsen’s work ‘Be My Quiet Friend’ sounds different. By drawing as much on a musical language and an understanding of music that comes from jazz-rock, from fusion music and from avant-garde jazz as on the pre-mises of composition music, the work puts us in the embarrassing situation of having to ask ourselves – as listeners – certain fundamental questions.

What kind of music are we listening to? On the face of it, it sounds like a jazz ensemble. Trumpet, drums, bass, keyboard and guitar. But Morten Olsen has earlier – in works like ‘In a Silent Way’, ‘Kata’ and ‘Oryq’ – moved within the relatively normal field of composition music. So is it jazz we are hearing now? Is this a decisive rupture for the composer?

The music sounds free, improvised – jammed. With the openness of jazz to co-creation by the instrumentalists. With the moment and the impulsive as the focus. Like a recor-ding of a series of inspired moments where this jazz group found one another in an intense session of playing together. Has the composer dumped his historical role in the dustbin? Has Morten Olsen let go of the reins? And in that case in what sense is he a composer?

But then other structures begin to appear in the music. Electronic interventions, produc-tion details that clearly show that this is far from being the result of a moment’s impro-visation. In the mix and in the recording certain sounds and manipulations of the instru-ments recur. This is not a work that can be recreated one-to-one; it is not a work that can be read from a score and played. The recording is the work.

And this takes us to a world that is neither jazz nor composition music (and yes, these categories are too narrow, too old-fashioned and so on, but let us use them as a starting point, with a rhetorical function). The record as work is something we know from popu-lar music, from rock and pop, from electronic music and heavy metal. It is the recorded music that is the final product, not documentation of something that should preferably be -experienced live.

Has Morten Olsen become a ‘recording artist’? Has he abandoned the concert?

And so on. The essence of ‘Be My Quiet Friend’ cannot be found in the existing voca-bulary. For the essence is precisely this uncertainty. Like a solar system with planets but no sun. For there in the middle where you normally find the star that not only lights up the elements but also holds them together in an ordered, meaningful, logical system, there is this void instead. This openness.

Take the disconnected fragmentation of the text, for example. Mainly written by Morten Skovgaard Danielsen, who before his death sent hundreds of texts to Morten Olsen, who then picked a line here, two lines there, and put them together. Precisely with the aim of not letting them point to any single meaning. And precisely in the clear aware-ness that as soon as the composer himself began to sense a narrative or a point, then he had to turn the other way.

Take the illusion of the jazz ensemble, for example. It doesn’t exist. The jazz drum-mer is in reality a computer program, loaded with drum sounds and then manipulated by Morten Rasmussen and Morten Olsen. The illusion is complete, and you sense the drum-mer’s grace, adroit craftsmanship and musical feeling. Only, he isn’t there. The closest we get to the drummer is the small pieces moved around in the MIDI interface on the computer. Each piece a hi-hat beat with whiskers, a bass drum beat, a roll with the sticks.

Take the singer’s personal jazz sound, It’s a self-assured, expressive artist who sings the odd textual fragments – you can hear that clearly. And Irina-Kalina Goudeva is an established artist – but in reality as a classical double-bassist. She came to Denmark when she was engaged by the Royal Danish Orchestra as a solo bassist in 1997, and today she plays concerts all over the world.

Morten Olsen himself plays acoustic and electric guitar, percussion, double-bass, electric bass and keyboards on the record, and among these only the double-bass is his own main instrument. The approach here was that the lack of technique was an advan-tage; that you hold an instrument less respectfully if you haven’t spent five hours a day for thirty years holding it properly.

In the process of deliberately removing the easily understood intention, the system and the conventional, the trumpeter Karl Husum was asked to improvise to sketches or drafts that Morten Olsen had made. Then the sketch was removed, thrown out, and what had just been recorded instead became the core to which the rest of the music was to react.

Throughout the work Morten Olsen’s partner Morten Rasmussen, who also plays key-boards and programs on the record, has been an indispensable collaborator. The two share a sound studio and have been making music together for so long that it “feels as if our brains are connected by MIDI cables,” as Morten Olsen says. Without Rasmussen the soundscape would be unthinkable, Olsen says.

The legacy of the producer and composer Brian Eno and his concept of music that is liberated from personal narrative or interpretable emotion is not far off. Music which instead has the void as its character. Room for the listener as a whole human being, in sensual but non-decodable music.

It is in the encounter between Eno’s intellectual approach to a genuine sensitivity and Miles Davis’ radical approach to structure and improvisation that we find an aesthetic approach to ‘Be My Quiet Friend’. In both cases we are talking about artists who have searched for the “sweet spot” that exists between intellect and ignorance. Where our rules no longer apply, and we have to listen anew. As new people.

And although Miles Davis’ work with improvisation resulted in impulsive masterpieces like ‘Bitches Brew’ and ‘Liveevil’, the truth is that after these sessions they cut and pasted a few minutes out of many hours of material. That is, the moment was tempered by subsequent reflection.

Brian Eno works with generative music which he cannot control, which arises from systems, coincidences or outside musicians’ improvisations. But at the same time he invests many hours in the work with the systems and algorithms, and it is always easy to recognize his music. In Eno’s music the choices are made in the work, up to the very moment when the reins are dropped.

It is in this perspective that Morten Olsen’s ‘Be My Quiet Friend’ should be under--stood. As a voyage of exploration out into music that situates itself outside the -catego-ries. Which tries to bring along virtues from composition music’s rejection of the normal, from fusion music’s search for the sublime in the moment and from art-rock’s focus on the record as an audio artwork in its own right.

That is why the record sounds as though it comes from a new place. And the gods that stand around it and bless the work are a motley and rarely united crew. They come from different points of the compass, and they must look profoundly different. But one thing is certain: they really have something to talk about.

Kristian Leth is a musician and writer. As a music journalist, he has worked with both radio and TV at the Danish National Broadcasting Corporation (DR) and Radio 24syv. He is the songwriter and lead singer in the band The William Blakes.

All songs published by Edition·S, Copenhagen