Danish National Girls' Choir, Danish National Vocal Ensemble, Athelas String Quartet, Michael Bojesen
Ib Nørholm's choral music is borne up by a profound integrity and reflects the composer's unique feeling for Danish poetry. With winter and snow as a recurrent motif, Nørholm has selected a bouquet of poems by among others Søren Ulrik Thomsen, Halfdan Rasmussen, Poul Borum and Sophus Claussen. In this premiere recording the music unfolds as fascinating testimony to an inspired encounter between words and music and a meeting of strong artistic personalities.
Buy album 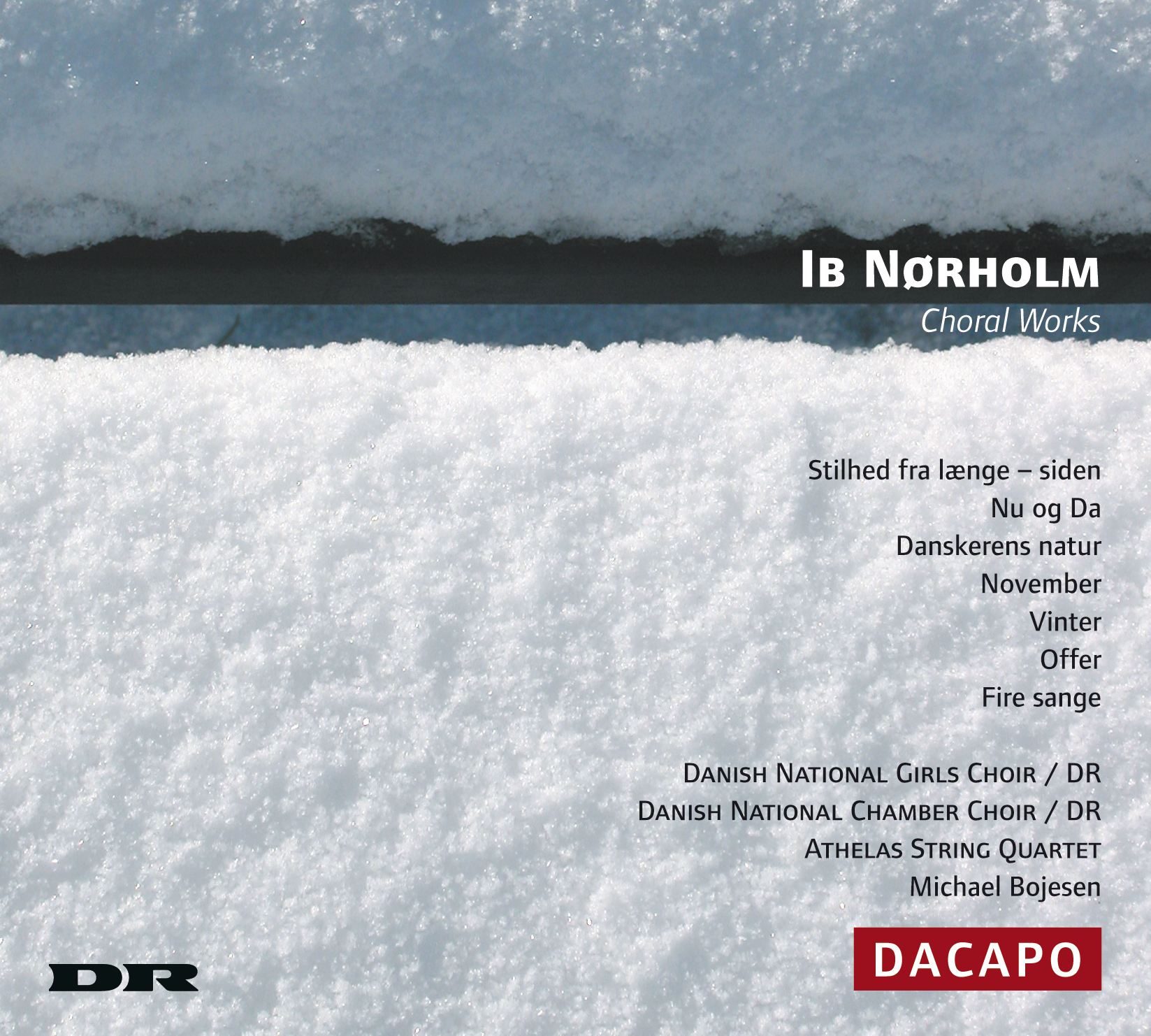 Ib Nørholm, born in 1931 in Copenhagen, can look back today at more than half a century of creative activity as one of Denmark's leading composers. Although genres like the symphony, opera and the string quartet loom large in the composer's overall oeuvre, choral singing and choral music have featured regularly in his work throughout his career, ever since his high school days, when he composed among other things the choral opera The Snail and the Rose Hedge. During his student days he himself conducted several choirs, and choir singing was also a regular element in his activities as the organist at the church Bethlehemskirken in Nørrebro, where he was employed from 1964 right up until 1998. Yet it is not so much the music for the church services that dominates his list of works for choir as the secular compositions, ranging from simple pieces for children's choirs and amateur choirs to virtuoso works for professional singers, both a cappella and as part of large-scale oratorio and symphonic compositions.

At the beginning of the 1950s Ib Nørholm studied music theory, music history, composition and organ at the Royal Danish Academy of Music in Copenhagen, where his teachers included Finn Høffding and Vagn Holmboe. After graduating he was a music critic on the newspaper Information and later an academy teacher, from 1972 employed at the Royal Academy, where he became professor of composition in 1981. His compositions from the fifties are marked by the prevailing Carl Nielsen tradition, inspired by his teachers among others; but around 1960 he could be found among the ranks of the young composers who changed course and began enthusiastically studying the new composition techniques and expressive forms that dominated international modernism. This led to a number of works where he experimented with serial techniques, graphic notation, music theatre and collage, until - again like a number of his colleagues - he turned his back on hard-line modernism and found himself as part of the special Danish phenomenon known as the New Simplicity. Since the mid-sixties Ib Nørholm's compositions have been characterized by their stylistic pluralism, which permits the composer - according to function and purposes - to choose and alternate between different more or less well defined stylistic idioms as equally valid and authentic. The composer has his whole experiential basis at his disposal (cf. the string quartet From my green herbarium) and can express himself in different styles depending on whether he is writing a choral song, a string quartet or a complex symphony.

Silence from long - ago, op. 150 (1998) for mixed choir a cappella. The music was written in 1998, but the text is literally ‘from long ago', and was written by the poet Morten Nielsen, who was killed in World War II. It is about strolling in snowy weather where the snow muffles the external everyday sounds and thus leaves scope for thought and emotions that come from within. The poem also expresses fear that this silence, this introspection ‘while I am so close to myself', will conceal the realities of the outside world.

Now and then, op. 162 (2001) is a cycle for equal voices and string quartet based on Danish poems by writers as different as Søren Ulrik Thomsen, Sophus Claussen, Thøger Larsen and Bo Green Jensen. The work was commissioned by and written for the Danish National Girls Choir / DR and its conductor Michael Bojesen. For his seventieth birthday Nørholm had been given several poetry collections, and he decided, as the textual basis for the commission, to put together a cycle of poems that were contrasting and from different times and yet still functioned together. The cycle progresses in a continuous flow with the string quartet as the linking element. There are two movements, but (as in the recording) not necessarily any pause between them.

The work is characteristic of Nørholm with its highly pluralistic stylistic expression, right from the very dissonant to the gentle and lyrical ‘C major' when the spring arrives. It is first and foremost very madrigal-like with its detailed tone-painting: the storm that arises, the throbbing engines of the trawlers, the sparrow that flies right up into the heavens and the wheedling and narcissistic self-absorption of the cat.

The title Now and then refers of course to the different ages of the poems, but also to the fact that in several of them there is a looking-back to the past. There is an alternation between the present-day and the older poems. In the first movement, consisting of four poems, there seems, despite the contrasts between the poems, to be a development from winter to spring (Ploughland), then a stasis - reflection -, harvest time (The Trawlers) and in the end the beach poppy which despite everything stands there until the winter storms ‘douse its last glow' (The Beach Poppy). In the second movement there are several allusions to death, something about looking back at what once was, and no longer is. The sparrow is closer to God, and the poet will be there too when his time comes (The Sparrow). The cat is apathetic and plays possum (The Cat). Janet and John (originally Ole Bole, the title of an old children's reader) is in a way the heart of the cycle, with its nostalgia, its looking-back at both good and uncomfortable memories (of death and grief). Ole Bole looks back at schooldays, and the memories well up - including those of people who are dead.

The Nature of the Dane, opus 132 (1994) is for mixed choir, written for the choir of the high school Sankt Annæ Gymnasium. The occasion was a concert on 5th May 1995 to mark the fiftieth anniversary of the liberation of Denmark, a commemoration that naturally suggests an emphasis on the national. As one of the texts Ib Nørholm chose Kaj Munk's poem How dark - how great, which is from the war period (1943). It is a strophic, ceremonial, regularly metrical and rhyming poem that grandiloquently praises the land of Denmark which held out stubbornly ‘against the millennial foe'. But characteristically for Nørholm, this poem was juxtaposed with a highly contrasting poem from a quite different time, Ivan Malinowski's Sail and anchor from the collection Vinterens hjerte (‘The heart of winter') (1980) which is subtle, free in form, and with a humorous slant (‘my knowledge is more than porous: it consists mainly of gaps'), extraverted and non-national. Malinowski's poem about ‘my knowledge' is set in a polyphonic texture, often in triplet rhythms, which flows lightly and elegantly, while Kaj Munk's patriotic poem is more homophonic with a regularly pulsing, almost chorale-like cantus firmus. The music alternates between the two poems, each with its own type of music, such that the patriotic poem almost functions as a refrain between the Malinowski stanzas.

As its subtitle the work has ‘two epochs - two temperaments', and this opposition forms the main body of the work. But as an epilogue Nørholm has composed music for Inger Christensen's very short (but slow-developing) The purest of snow, which seems to view it all from outside, from above.

November and Winter (1996) are both for three equal voices, written for the Danish National Girls Choir / DR. They have texts by Jette Ulfbeck who, in a light, subtle tone, respectively depicts the paintbox of the November forest (in the Danish text everything rhymes with blade ‘leaves') and the frosty-clear night sky of winter.

Throughout his career Ib Nørholm has collaborated closely with the poet Poul Borum. Many of his works include Borum's texts - or translations - all the way from simple a cappella settings to symphonic works. The tight form and the multi-layered expression in Borum's poetry was well suited to Nørholm's mode of expression, besides the fact that the content of the poems sparked off something in the composer.

Sacrifice, op. 34 (1966) is one of the earliest works in which Nørholm's stylistic pluralism emerges clearly. It can be seen as a sister work to what is generally regarded as the masterpiece of stylistic pluralism, the string quartet From my green herbarium, since both works partly use the same material. For example the third and fourth movements of the choral work, Grief and Life, are used again as core movements in the symmetrically structured string quartet. In the choral work too they are at the centre, with the typical Nørholmian confrontation of contrasting idioms: the quiet but moving seriousness of Grief against the effervescent, literally life-affirming joy of Life. Nørholm must have felt that Poul Borum's very different and very rigorously formed poems cried out for very different stylistic expression. In the first movement, Blood, a solo melody is played against a chordal choral texture that underscores the central words ‘blood' and ‘growth'. The second piece, Encounter, takes the form of an almost dodecaphonic relay race where the melody leaps from part to part and where small fragments of text and motif are tied to the individual parts. The third piece, Grief, is in a close, cluster-like dissonant texture, while the fourth, Life, is a regular C major piece followed by a bitonal canon. The fifth piece, Stage set, is rhythmically very complex with bitonal tendencies, until the expression is concentrated in the decision to ‘take the stage'. In the last piece, Sacrifice, each choral singer, in a close cluster sound, performs the text in individually formed rhythms, while a soloist emphasizes central words in the text.

Four Songs, op. 3 (1955) for mixed choir is one of Nørholm's earliest works. They were written while he was still at the Royal Academy to texts by Halfdan Rasmussen, whose poems then were all rather gloomy, written in the shadow of World War II.

Wing-shot is about the fact that the terrible events (of the war) are over, but that the fear has left permanent marks. War memories are also present in Children playing at war. Those who have experienced the traumas of war cannot pass on the experience to their children, who must learn their own lessons. Rhythm is about the need to find ‘the deep calm, if the soul is to grow'. Resolution is again about the fear which will perhaps ‘raise us from the shame and force the ripening of life'.

The style in these early songs is in keeping with the prevailing Nordic diatonic style of he fifties, but they already seem very mature and unmistakably Nørholmian with a harmony that in many ways points forward to - for instance - the tonal style of Americana from the eighties.

Dacapo Records acknowledges, with gratitude, the financial support of the Danish Composers' Society/KODA's Funds for Social and Cultural Purposes and KODA's Collective Blank Tape RemunerationThis CD has been recorded in cooperation with the Danish Broadcasting Corporation (DR)
Array ( )
randomness