Danish Bjarke Mogensen (b. 1985) is the new star of the accordion in a country where there are already fine accordion traditions. On this CD Bjarke is accompanied by the Danish National Chamber Orchestra conducted by Rolf Gupta in new Danish accordion concertos by Per Nørgård, Ole Schmidt, Anders Koppel and Martin Lohse – the last two written specifically for the young soloist. 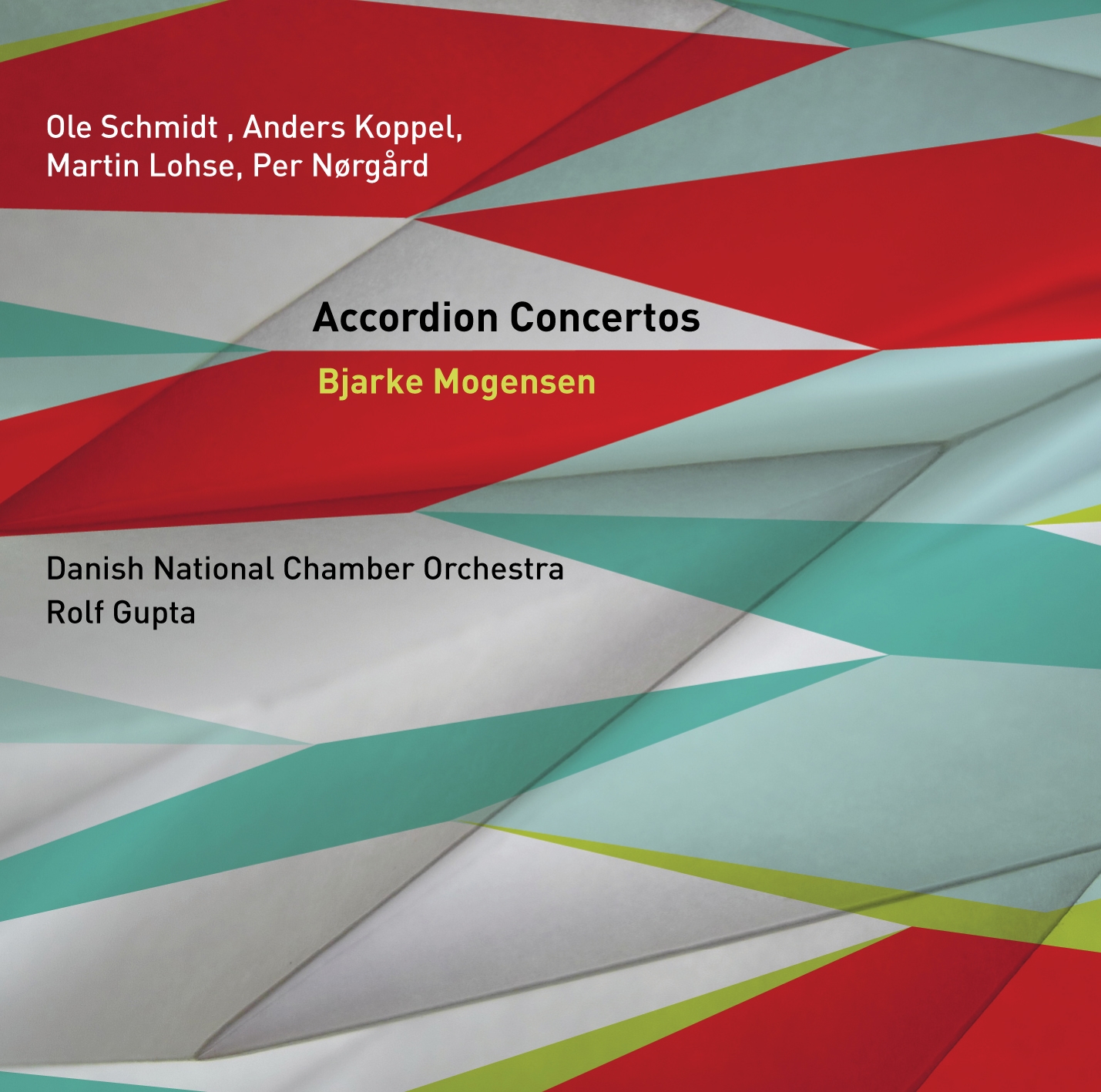 I disliked the accordion immensely, but when I met Mogens Ellegaard, my opinion of the instrument completely changed in less than an hour,\ Ole Schmidt remembered. \\It was then that I decided to write Symphonic Fantasy and Allegro for him, and I went to work in close collaboration with the interpreter. Ellegaard said to me: ‘Feel free to write with as much virtuosity you like. There's hardly anything that can't be done on the accordion.'\\

The result was a solo concerto in two movements where the ‘slow movement' has been omitted. Schmidt expresses himself in his characteristically playful but precise style, and has heroes like Stravinsky and Bartók standing by his side. The first part takes its point of departure in a succinct rhythmic motif, while the rhythmic play of the second movement is more roguish and typical of the composer's bizarre humour.

Schmidt accepted Ellegaard's challenge regarding the solo part. \\In the Fantasy the soloist has ample opportunities for free musical development in broad virtuoso cadenzas,\\ he explained. \\The last movement, with its rhythmic, scherzando-like elegance, does not come to a close with the traditional grand finale of ‘four kicks and a pirouette', but fades away to a delicate pianissimo with the accordion having the final say.\\

Schmidt's and Ellegaard's first performance with the Danish National Symphony -Orchestra was scandalous enough in its very idea, because at the time the classical milieu looked down on any accordion instrument as ‘popular' in the worst sense; but surprise is precisely one of the main ideas in Schmidt's concerto, and the fact that Symphonic Fantasy and Allegro still has this effect after more than half a century says something about its strong musical qualities.

At the time it was in fact not possible to train as a classical accordionist in Denmark. In 1953 Ellegaard had been one of the first Danes to get hold of one of the newly--invented classical accordions with melody bass, which unlike a traditional accordion has a free keyboard in both hands. His virtuoso demonstration of the instrument prompted several of the best Nordic composers of the time to embrace its potential. In 1970 Ellegaard was appointed the first Danish academy teacher - and later professor - of the accordion, and in this way too he placed the instrument firmly within the realm of modern music. Several outstanding accordionists have appeared since, and the development of the accordion continues here and now.

Anders Koppel: Concerto Piccolo
An example of how naturally the accordion fits into contemporary music can be found in Anders Koppel's music. Since the 1990s, in rapturous succession, he has written more than 20 solo concertos for a variety of instruments, including a double concerto for violin and accordion (recorded by Bjarke Mogensen on Dacapo 8.226055) and most recently the accordion concerto from 2009 entitled Concerto Piccolo, written for Bjarke Mogensen and the -Danish Radio Youth Orchestra.

As a son of the versatile composer and pianist Herman D. Koppel, Anders Koppel grew up with music around him all day. When the Youth Revolution arrived, he withdrew for a while from the classical culture to start the epochal rock band Savage Rose. Since then, as a composer and keyboard player, he has worked with everything from film -music and ballet to world music, and in recent years very much with symphonic music.

In Concerto Piccolo neoclassical features are mixed with elements from tango and jazz, and in the first movement the atmosphere is indeed almost filmic. There is an eerie, muted quality to the music, which is based on an ominous tick-tock figure held in check by Koppel's pithy humour. In the Largo movement the stillness become unexpectedly tragic - but beautiful! - until the ticking rhythms return with renewed strength in the third movement, which is a Scherzo with a concluding solo cadenza.

Concerto Piccolo is ‘piccolo' because the accordion plays in a high ‘piccolo register' and because the orchestra is reduced to strings alone. But there is absolutely nothing small about this reinterpretation of the classical concerto genre, and like Ole Schmidt's work Koppel's concerto is a fine measure of how one can handle the balance between the accordion and the orchestra.

Martin Lohse: In Liquid ...
The composer Martin Lohse (b. 1971) has written his accordion music directly for Bjarke Mogensen.

Among the works on this CD, his In Liquid ... from 2008 is technically the most difficult for the soloist - although this neither can nor should be heard. The solo part does not function as a display of virtuosity, but forms part of the musical totality, where the soloist has to have an intimate knowledge of the individual orchestral parts.

As for the title, Martin Lohse himself explains: \\The title relates mainly to the ‘liquid' feeling of time: repetitions, sequences and patterns that slowly change or interweave, shifts in the tempo as it accelerates step by step, or a tempo that is frozen in an almost static sensation of time - perhaps a sensation of long lost times that live on in our memory and blend with our present right now.\\

Lohse's music is inspired by among other things Arvo Pärt's minimalistic style and cultivates formal idioms of the past in a dreamlike sound-world. Its inwardness is also expressed in the way the traditional concerto form is reversed: In Liquid... has its concertante and dramatic material placed in the middle of the work, while the outer movements are static and meditative. The first movement is a neo-Romantic elegy with the accordion deftly working its way into the picture. Later it stands out more clearly in an interesting texture that includes vibraphone and harp. In the second movement the tempo increases after a slow introduction, and the fast section culminates in the third movement, an extended cadenza in the improvisational style. With the last movement the music returns to the dream world of its beginning.

\\In my music, I try to pinpoint small musical moments and atmospheres that can progress and unfold timelessly. The combination and collision of ‘pure', clear music with fragmented, multi-layered music is one of the main characteristics of my music. At its heart, the music often suggests harmonic and melodic reminiscences of past experiences in brief glimpses or extended segments which, combined with a floating sensation (accelerando, decelerando etc.) create music with organic form as one of its main foundations.\\

Per Nørgård: Recall
Per Nørgård's accordion work Recall was composed in 1968 for symphony orchestra and revised in 1977 as a version with chamber orchestra. Apart from a very early concertino for piano, it is Nørgård's first work for soloist and orchestra. His other solo concertos were written in the 1980s and 1990s and involve quite different conflicts between soloist and ensemble.

In several ways Recall stands by itself. It is a work that comes from Per Nørgård's crucial decade, when he abandoned his teacher Vagn Holmboe's guiding principles to try out all sorts of other things. He developed his unique technique with the so-called ‘infinity series', and worked with strict serialism, collage and improvisation. In Recall it is folk music in particular that provides the inspiration.

\\Recall was composed as a tribute to my recollections of the vitality of Balkan -folklore - as perceived by an urban Scandinavian. So the listener will listen in vain for any ‘authen-ticity' in the material. The slow introduction and the fast main movement unfold freely in their own way, which is never far from adopting sounds, melodies and rhythms that are far more ‘the sixties in Denmark' than ‘perceived folklore': it's an entertainment, based on childhood memories (‘recall') seen (heard) through a grown-up's eyes (ears),\\ Nørgård wrote many years later.

Recall was composed for Nørgård's friend Lars Bjarne (later Lars Dyremose), who was Ellegaard's rival. They were virtuosi of the same standard, and each in his own way founded a ‘school' in the accordion milieu. Nørgård wrote works for both: in 1967 the experimental solo work Anatomical Safari for Ellegaard and the next year Recall for Lars Bjarne. The work is a kind of rhapsody in three sections with Italian titles: Cántico Antico, Villanesca and Rondino. The last two parts, with their festive atmosphere and dance music, are a tribute - unusual for Nørgård - to the National-Romantic tradition of Liszt and Enescu. Nørgård updates the festivities with 1960s congas and with chord changes and rhythms that maybe express his enthusiasm for The Beatles. Recall is ‘music about music', where the folk musicians of the past meet the effervescent optimism of the Flower Power era.