Martin Lutz (b. 1974) is an artist with bold strokes, in terms of both style and genre. While his Stabat Mater and Two Marian Motets are musical settings of much-loved religious poetry, the accompanying works are devoted to earthly love in its most spell-binding form. This release present Lutz’ choral compositions for the first time on CD, showing the otherwise jazz-oriented composer from a more classical side. 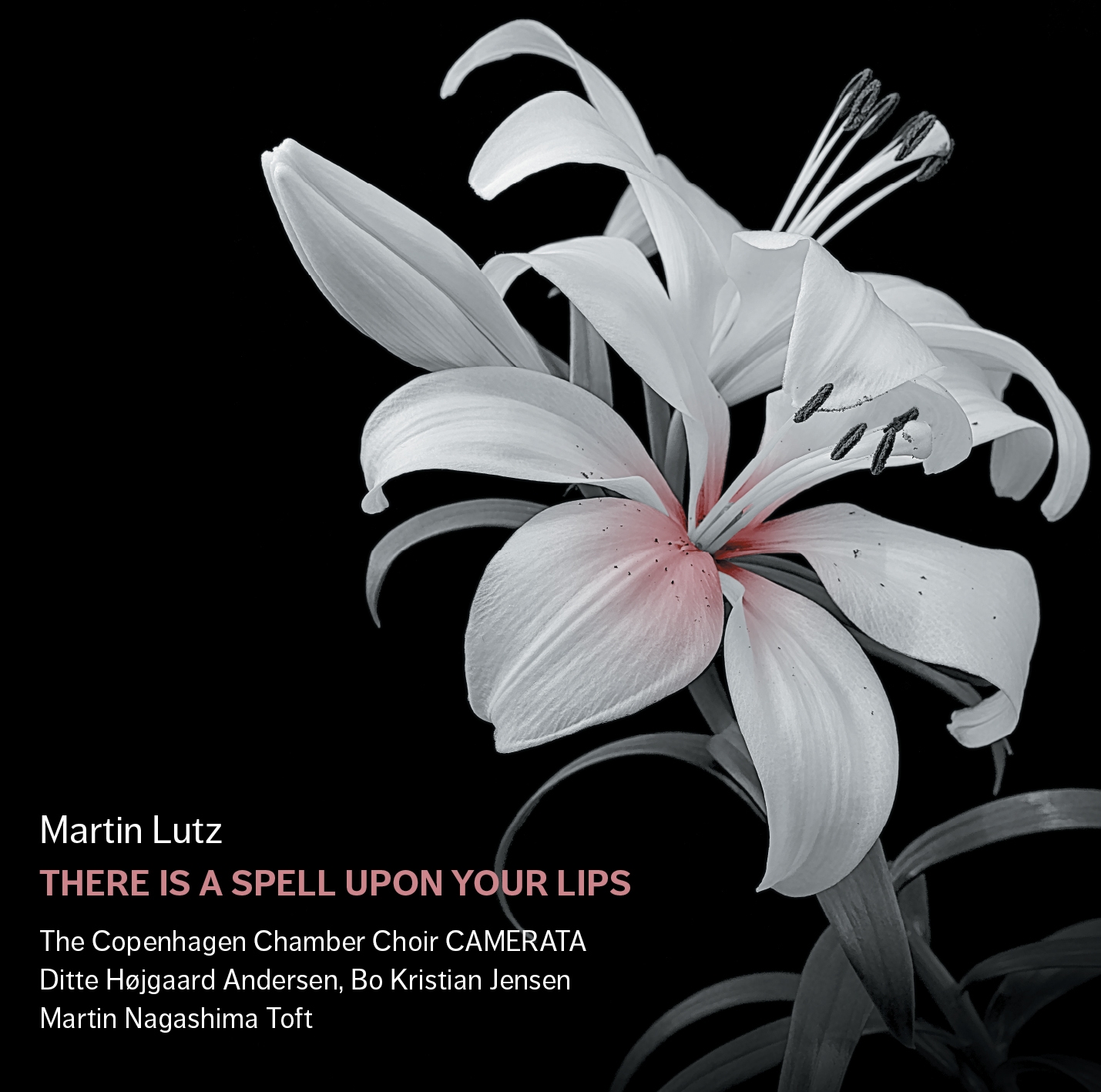 "All the singers and players, in fact, are excellent."
Philip Greenfield, American Record Guide
“Martin Lutz is an artist with bold strokes, in terms of both style and genre”
New Classics
Total runtime:
66 min.

When a musician becomes a composer, the art of composing often arises as an exten­sion of the performance of music; sometimes directly, as when the pianist composes his own piano works, sometimes as the fulfilment of a need for musical expression to which one does not have direct access through one’s own perfor­mance; like an afterthought that con­tinues in a different ­medium.

That was how the classical composer originally arose: as a musician with more on his mind than his own musical performance, and that is how it is too with the jazz pianist Martin Lutz when he expresses his romantic and poetic vein in choral works.

Martin Lutz (b. 1974) is a thorough man, and his music demonstrates a profound empathy with the genres and styles with which he works. But he is also an artist who expres­ses himself with bold strokes, in terms of both style and genre. With a few handfuls of releases behind him he has shown he is at home not only as the anchorman in his various jazz and crossover-like ensembles, but also as the originator of music for child­ren, music for sport and athletics and as a classical composer and arranger. The last of these roles has to a great extent grown out of Lutz’s many years of working as a conductor of a number of amateur and school choirs. Alongside his diverse acti­vi­ties as a musician Lutz has a day job as a high school teacher of music and German.

All the same, with this release, Martin Lutz is taking a step into a new dimension. Here the chamber choir Camerata and the conductor Martin Nagashima Toft, along with a small group of choice instrumentalists, present the composer Martin Lutz from his most purely classical side.

The main work, a good 40 minutes long, is the Stabat Mater (2007) for soprano and tenor soloist, mixed choir, oboe, vibraphone and cello. ‘Stabat Mater’, a religious poem from the thirteenth century, attributed to Jacopo di Todi, is one of the Catholic tradition’s best known hymns. The text is about the mourning Virgin Mary standing by the cross where her condemned son Jesus hangs, living out his last hours as an earthly human being.

For the last 500 years the hymn, with its story of the suffering and death of Jesus on the cross seen from his mother’s supremely painful point of view, has become world-famous as the basis for a succession of great musical works in the motet genre. The Stabat Mater has thus become a kind of motet counterpart to the Requiem Mass.

And with his Stabat Mater Martin Lutz places himself at the ambitious end of the genre, at greater length than the famous classical models Palestrina, Scarlatti and Pergolesi. His models are more the Romantic works of among others Rossini and Schubert, which with a dramatic oratorio-like element elevate the genre to concert length.

However, despite its length, Lutz’s Stabat Mater is not a swelling Romantic piece. There is something intimate and close about the work, which moves through 17 short movements with alternating choral and solo configurations, plus a variety of instrumen­tal accompaniment. The music is borne up by a powerfully imagistic expres­sive­ness that mixes a classical major-minor tonality with a more freely fantasizing tetradic harmony. The movements come to the fore as a succession of mood-changing tableaux where the form-creating element is a gradual tonal accu­mu­­lation of repeated melodic phrases, often with a single appealing motif as an ostinato. Here one senses the roots of the music in a playful improvisational practice where the musical ideas flow easily and naturally into one another and create a gentle, organic progression.

The Two Marian Motets, Salve Regina and Ave Maria, belong genre-wise to the same category as the Stabat Mater. Here too we find much-loved Catholic textual models which a royal succession of composers have raised to the starry firmament of the classical choral tradition over the centuries. The Salve Regina and Ave Maria are canonical prayers and thus, unlike ­Stabat Mater, belong to the liturgy – they are not conducive to the grand-scale concert form, but traditionally wear humbler, more reflec­tive musical attire. This is also the case with Martin Lutz’s Marian Motets which, each with its own shade of devotional gravity, praise the Holy Virgin Mary. Here too the good melody is at the forefront, while the homogeneous a cappella format gives rise to more elaborated phrasing and an expressiveness that can be characterized as a mixture of the traditional polyphonic motet style and a contem­porary, modal choral sound that recalls the breakthrough in recent years of compo­sers like Ola Gjeilo, Paul Mealor and Eric Whitacre.

The curious title Hoc est corpus, hokus pokus reveals that with the next work we aban­don the context of the traditional models. Nevertheless this too is a motet com­po­si­tion. The magic formula ‘Hocus Pocus’ is in fact derived from the Latin words ‘Hoc est corpus’, which come from the Catholic Communion’s sacramental transub­stan­tiation of the Host into the body of Christ. What the pawky title thus suggests is that the motet takes its starting point in the text of the beginning of the Latin Eucharist ritual, but is then succeeded by an English translation of the end of the ritual. The transition between the two linguistic worlds is expressively marked by a long tenor solo. A musical point is also traceable in the fact that the polyphonic and melismatic style in the Latin introduction is replaced by a warm-sounding and text-close choral style in the English ending.

The title work of the album, There is a spell upon your lips, with its almost ten minutes of playing time, is also the longest individual movement. The text is an English translation of the Danish poet Emil Aarestrup’s famous love poem Der er en Trolddom paa din Læbe from 1835. Throughout the piece the soprano soloist, oboe and choir intermingle in a heartfelt blend where the style moves gently back and forth between a neo-Romantic tonal universe and a more contemporary jazz-tinged modal style marked by a soft rhythmization of the metre and a hint of per­cussive elements in the choir voices. A long section in the first half of the piece builds up with a number of repetitions of the same phrase, where men’s and women’s voices alternately chant the first words of the text, ‘There is a spell’, like a magic formula, and like a stylized dance around the implicit declaration of love behind the enchanting lips.

With Two Love Songs to texts by William Shakespeare the love theme is of course taken up from Aarestrup’s enchantment, but at the same time the historical setting is also taken back to the poetic universe of the Renaissance. The two pieces are highly homogeneous and in style and expression are not far from the contemporary choral lyricism of the Marian Motets. All is euphony, and in a tasteful balance which may well be said to perpetuate the serene ideals of the Renaissance; but with a modern tonal quality and catchy melodies Martin Lutz goes straight to the heart with his candidates for modern choral classics.

Thanks to the following people for financial support via Booomerang – Crowdfunding, www.booomerang.dk: