All of Vagn Holmboe's (1909-1996) works for violin and piano are on this CD, which contains the three violin sonatas and a handful of other small pieces for the same instruments and for solo violin. This music is from the chronological extremes of his long career, which lasted from the 1920s until the 1990s. The violin was Holmboe's own instrument and his violin works show a decidedly extroverted love of music-making. Much of the music is inspired by the folk music that Holmboe encountered and studied at the beginning of the 1930s in the Balkans and Transylvania, but also by the relatively neglected Danish fiddling tradition. 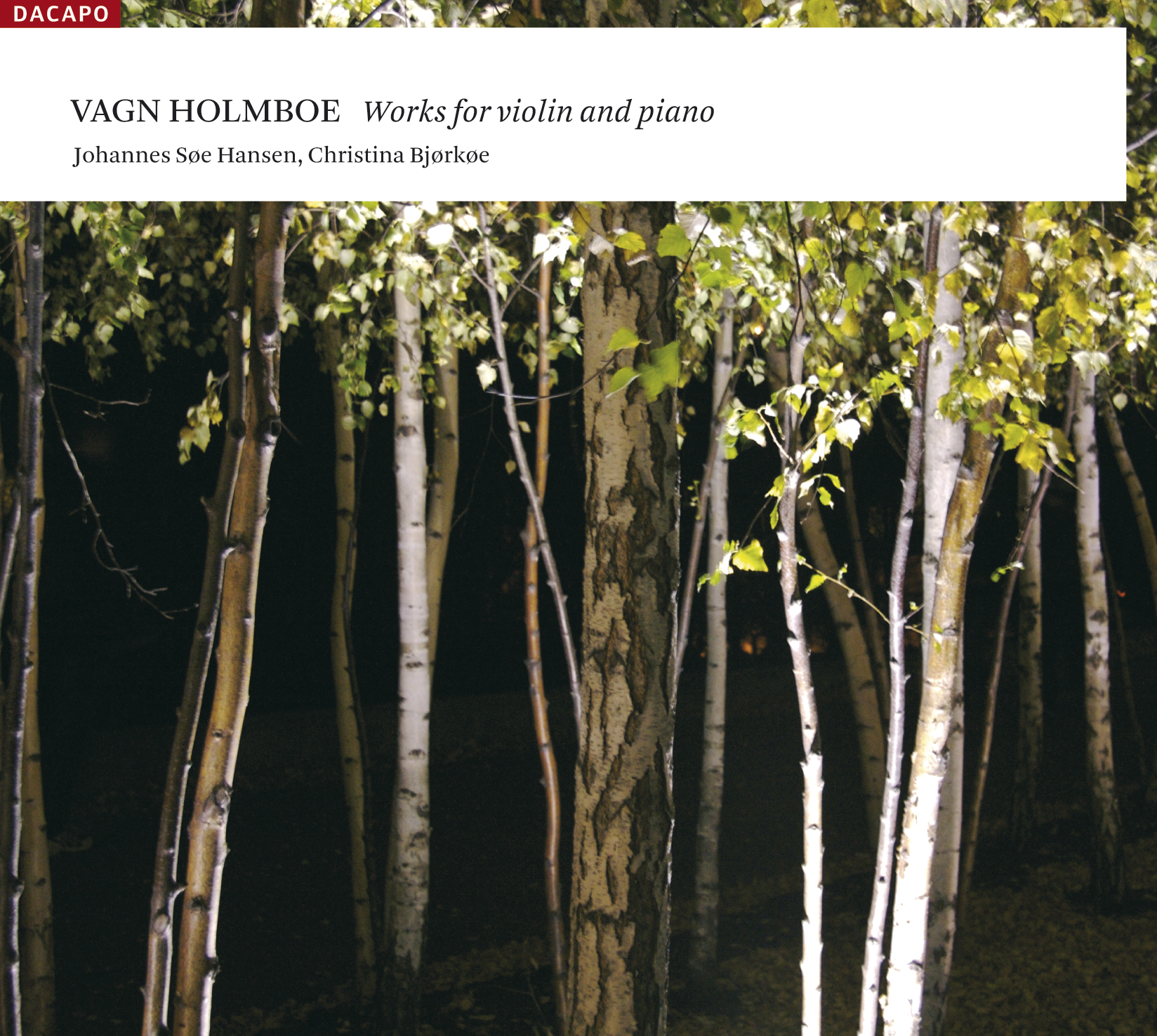 On this CD you can hear all Vagn Holmboe's existing works for violin and piano. This is music from the chronological extremes of his long career, which lasted from the 1920s until the 1990s. As a stop along the route we have the Third Violin Sonata from 1965. The violin was Holmboe's own instrument, and his violin works are striking, extroverted examples of the joy of music-making. Much in them is inspired by folk music, not only the kind from the Balkans and Transylvania that Holmboe encountered and studied at the beginning of the 1930s, but also music from the rather neglected Danish folk fiddling tradition.

In 1925 Vagn Holmboe was admitted to the Royal Danish Academy of Music in Copenhagen after an audition with none other than the national composer Carl Nielsen, who listened to him playing violin and piano and looked through a couple of his compositions. The academy years were typified by studies of the classics and polyphony, a combination that was well suited to the "new objectivity" of the period. But in the two earliest violin works we hear what Holmboe also had in his baggage. The little Violin Solo from 1929 is an amusement in the pure Scandinavian fiddling style, not just an ironic pastiche, for Holmboe grew up in the provincial city of Horsens in Jutland at a time when there were still traditional fiddlers, and when music only existed if you played it yourself. The piece was written on New Year's Day - one can only guess at the circumstances.

The previous year he had experimented much more ambitiously with folk music in his Arabesque for violin and piano. In the slow first section of the piece a more exotic folklore is prevalent, but the Nordic tradition rears its head in the short allegro. The piece was given the subtitle Bagatelle no. 1, but nothing further appeared in the ‘series'.

Holmboe's Nordic and classical ballast was challenged at an early stage. Through his elder brother Knud he developed an interest in Arab music. Knud Holmboe was a correspondent in the Middle East and had converted to Islam when he was murdered in 1931 by Beduins in Saudi Arabia. Another influence came from Holmboe's wife, the Romanian pianist Meta Graf, whom he had met on a study trip to Berlin in 1930. Both were very interested in folklore, and in 1933-34 they studied folk music among shepherds and Gypsies in eastern Europe. The actual purpose of the journey was ethnographic studies in the Middle East and North Africa, but in the course of the journey Vagn Holmboe caught typhus, and the couple got no further than Romania.

The music of the Balkans influenced him deeply over the next few decades. Holmboe's contemporary colleague Svend Erik Tarp joked: "We're all very fond of Vagn's Romanian folk rhythms from the Horsens region". Holmboe did not actually abandon his cultural base: it was the expression rather than the specific stylistic features of Balkan music that captivated him. "The direct and emotional, the feeling and the absolutely clear expression - that interested me greatly. There was something elementary in this music," he reminisced as an old man.

The inspiration from Balkan music and Béla Bartók is strong in Violin Sonata no. 1, written in 1935. This is the origin of the shifting time signatures, the stamping dance rhythms and the simple, robust themes. The solo part is vital and fiddler-like, free of academic formulae, and it is all handled within the framework of a succinct Neoclassical form. The second movement with its lamenting recitation is quite devoid of any fixed time signature, and the Phrygian-mode third movement is an ecstatic Gypsy dance around the campfire. Here we are very far from the noble classics, the Danish sound and the idol Carl Nielsen.

The sonata was first performed the same year by Sverre Forchhammer on violin and the composer Otto Mortensen on piano. Holmboe also made a version for violin and string orchestra, which he called Chamber Sonata no. 1. Again, no further works followed in the series, but the orchestral version can be seen as a precursor of his long succession of chamber concertos, which began in 1939.

Violin sonata no. 2 was written in 1939, a watershed year for Holmboe. That year he won the composition contest of the Royal Danish Orchestra with his Second Symphony, and used the money to buy land in the beautiful North Zealand landscape where he and Meta built a house and lived for the remainder of their long life. That year World War II broke out, and the dilemmas of the war left their strong marks on Holmboe's humanist mind.

In Violin Sonata no. 2 the folk music from the first sonata has developed into something more abstract. The format is ambitious, the harmonies and rhythms subtler, and the interaction of the instruments is more contrapuntal. The violin sets off like an explorer into the music, and in a close dialogue with the piano the first movement becomes a progression of symphonic format, where the classical sonata form is fused with a fluid, organic development. Here one truly senses the compositional potential Holmboe possessed. The second movement begins with the violin alone in neo-Bachian style. In its interplay with the piano the music evolves into sophisticated three-part Baroque counterpoint alternating with passages that seem influenced by Bartók. In the fiery gusto of the third movement the violin emerges as a folk instrument with drones and open strings. The movement is tripartite, with a burlesque statement that is rounded off in the recapitulation by a captivating ‘chase' between the two musicians.

The work was given its first performance in Copenhagen in 1942 by Holmboe's contemporary colleague, the composer and pianist Herman D. Koppel, with his brother Julius Koppel on violin. This masterly sonata had to wait until 1991 before it appeared in print.

For the next quarter-century Holmboe wrote no chamber works for violin. Violin Sonata no. 3 was written in 1965, in the midst of one of Holmboe's most concentrated creative periods. In those years he composed his monumental Requiem for Nietzsche, the Seventh and Eighth String Quartets and the choral classic Sange mod Vårdybet (‘Towards the Deep of Spring'). The same year he had retired from his post as professor at the Royal Danish Academy of Music to spend all his time composing.

Holmboe's music from this phase is not known for sounding particularly folkloristic, but listen to the soulful adagio in the sonata, which is yet another inspired expression of the influence of Balkan music. It is almost an echo of the slow movement from the first violin sonata, written thirty years before. Violin Sonata no. 3 is also a very rigorously composed work. For the second movement Holmboe used a small triplet motif to build up a whole scherzo with typical understated humour. And with brilliant affect he has the first movement - a fantasizing prelude over a pedal point on C - return as a logical development of the otherwise so agitated last movement.

The sonata was given its first performance in 1966 by Peder Elbæk on violin and the pianist Friedrich Gürtler at a concert in Brussels.

Holmboe's life, like his music, was guided by intellectual clarity and a tough, stubborn vitality. Comparisons to his model Haydn are hard to resist. Far beyond the age when others would have gone into retirement, Holmboe was still composing. From the 1990s come two violin pieces. The little Reminiscences from 1990 was written as a musical aphorism for a friend, while Holmboe's last major piece for violin, Haiduc, has a different story. It was written at the request of Janet Packer, an American violinist who visited Vagn and Meta Holmboe at their home in Ramløse in 1993. Over a traditional Danish lunch with pickled herring and schnapps she asked Holmboe if he would like to write a piece for her. Holmboe was then working on his thirteenth (and last) symphony and did not think his age and health would permit him to take on more tasks. But a few months later, to her surprise, Janet Packer received the new piece Haiduc in the mail.

In the Balkans haiduc (or hajduk) is a term for the outlawed freedom fighters who struggled against the Ottoman empire, stole from the rich and gave to the poor. The piece has a strong, heroic energy and it is very moving that in his last violin work Holmboe returned both to the freedom struggle of his youth and the folkloristic source of inspiration from the Balkans, which had launched him on his first violin sonata six decades before.

Haiduc was given its first performance by Janet Packer and the pianist Orin Grossman in New York in 1995. In his final couple of years Holmboe wrote a further three works as well as the uncompleted string quartet Quartetto Sereno, which was finished by his pupil Per Nørgård.

Material and sources: Edition Wilhelm Hansen and The Royal Library

This CD has been sponsored by Solistforeningen af 1921