This recording marks the beginning of a new series devoted to previously unrecorded chamber works by the Danish composer Vagn Holmboe (1909-96). The music was written from the 1950s to the 1980s and ranges wide, all the way from the playful to the serious. Holmboe's inexhaustible wealth of ideas and his mixture of lightness and ingenuity run through all the works.  As does his 'metamorphosis' technique, which makes the music breathe and grow like the Nordic landscape of which Holmboe felt himself to be a part. 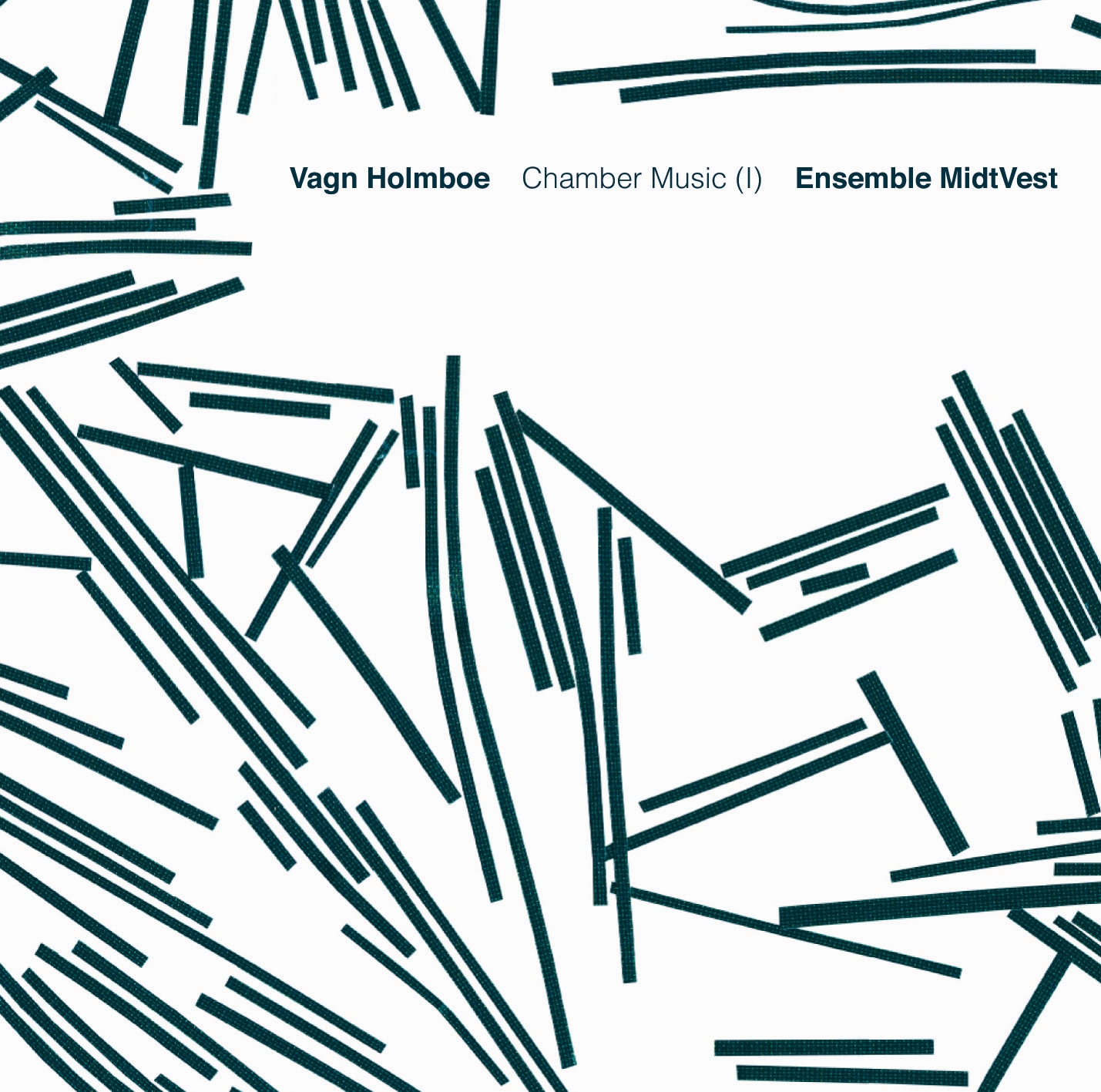 Sky, earth and water are basic elements that can be heard in most of Vagn Holmboe's (1909-96) works. He was a decided nature-lover who lived in the countryside from 1939 until his death in 1996, and over the years personally planted 3000 trees on his land by the lake Arresø in northern Zealand. Alongside his feeling for nature he had a highly intellectual side, and this gives his music a characteristic duality. Holmboe's music is concentrated and logical, but at the same time breathes naturally. His works bud, grow, flower and contract, developing as metamorphoses with the cycle of the sun.

The metamorphosis technique is quite natural for me, and this is related to many things that seep in slowly through living with nature,\ Holmboe himself explained. \\Here one experiences a constant metamorphosis. Eternal change. The trees, the grass and the weather all change and are transformed into something else. Something decomposes and becomes something new. The whole huge process of nature plays a major role. This is something underlying, something very profound.\\

Vagn Holmboe wrote a total of almost 400 works, mainly instrumental music. The oeuvre spans innumerable forms and instrument combinations. In 1949, after a whole ten attempts, he wrote the string quartet he considered worthy of being called no. 1 in a future major production of quartets - he wrote a whole 21 of them. The status of the string quartets in Holmboe's list of works has rather overshadowed his other chamber works. The present CD remedies this by presenting five works, each of which stands alone - and is nevertheless quite typical of the composer. For Holmboe's love of chamber music becomes truly striking when we try to get an overview of his large output. In his chamber music his musical ethos becomes very clear. This is where all the instruments have an equal say in a democratic conversation.

Often it was individual musicians or ensembles in the Danish musical world who made him broach the possibilities of the various combinations. \\A musician comes to me and says ‘Couldn't you write something for me', so I think ‘Maybe I can' and then one day I get the idea, so I do it,\\ Holmboe said in an interview in 1976. \\In this sense it's the commissions that make you write. Commissions are decidedly a very positive stimulant; it isn't because of the financial aspect, but if I'm asked to do something, I'm willing to do it - that is, if I can.\\

In Holmboe's lifetime the flute had several outstanding Danish exponents. The oldest was Holger Gilbert-Jespersen (1890-1975), who left his mark on the repertoire as early as the 1920s, when Carl Nielsen wrote his Flute Concerto directly inspired by the flautist. The concerto involves a musical portrait of the French-trained flautist's mercurial artistic personality. We recognize some of the same spirit in Holmboe's flute quartet Primavera op. 55 from 1951.

Primavera (\\Spring\\) comes fascinatingly enough from the same period as two of Holmboe's majestic masterpieces: the Eighth Symphony, ‘Sinfonia boreale', and the first volume of the choral work Liber canticorum. Between them stands Primavera as a playful breathing-space. It is certainly spring music, a serenade in clearly defined forms. The first movement starts as a nonchalant stroll coloured by the pure, tender light of the Nordic spring. With a thematic economy that lives up to his spiritual mentor Haydn, Holmboe builds up a contrasting section in a minor key based on the same subject.

The second movement is a canon that meditates over the cycle of nature, which has once more brought forth budding life. After the exposition of the subject the piano comes in with a contrapuntal part that underlies the subsequent repeats of the canon theme with quite new colours. This creates a sense of elevated nature mysticism that continues in the slow introduction to the third movement. After this the final movement, with its light, dancing 9/8 time, returns to the spring mood of the first movement.

Primavera was given its first performance in 1952 by among others Holger Gilbert-Jespersen, and in 1963 it was recorded by musicians from the Royal Danish Orchestra and the composer Niels Viggo Bentzon on piano.

Holmboe also wrote a number of solo sonatas, often for neglected solo instruments whose repertoire was thus enriched with works of substance. The first solo sonata was for the flute, and once more the music was written for Holger Gilbert-Jespersen.

Holmboe's Sonata for Flute op. 71 from 1957 - like the whole solo sonata genre - is inextricably associated with Bach. With a nod to the Baroque master, Holmboe's sonata begins with a prelude and a fugue. The prelude is in improvised style and can be likened to a fantasizing shepherd's pipe in a desolate landscape. The second movement is a fugue, and as with Bach it is actually a self-contradiction to speak of a fugue for a single melody instrument. In the case of the flute it is even more difficult than with the violin or cello in Bach, as they can in spite of everything play more than one note at a time. Holmboe achieves the illusion of the polyphony of the fugue by shifting the flute part among registers so that quick shifts between the low and the high pitch create the placing and interaction of the fugue parts.

The title of the third movement, Andante interrotto, is a nod to another of Holmboe's models, Bartók, and the movement Intermezzo interrotto from his famous Concerto for Orchestra. The idea is the same in Holmboe as in Bartók: an expressive pastoral melody is interrupted by a theme of a quite opposite character. The irritating, teasing interruption, which appears twice, makes the movement a piece of chamber music for two - played by one. The Flute Sonata ends with a frisky rondo, another side of the shepherd boy to whom we were introduced in the first movement.

Holmboe's quartet op. 90 from 1966 is a flute quartet with a different instrument combination from Primavera. Here the ensemble can be compared to a string quartet where the first violin has been replaced by a flute.

The serious quartet op. 90 is clearly from a later phase than Primavera. It is highly concentrated contrapuntal music where everything superfluous has been cut out. \\I can't abide tricks,\\ Holmboe said. \\I think the moment you use the various tricks - just for the sake of the trickery, that is - then it's a lie. Then you're lying in the music.\\ Holmboe's precise mode of speech and his lean, sinewy stature recur in his music - he was a man of great integrity.

In the first movement two subjects interact in a kind of sonata movement form. The initial notes of the violin are the first subject, a motion in triplets that make a questioning gesture over a nine-note interval. The second subject, as a contrast, is a determined reply in the viola based on the smallest interval, a minor second. Is this a lively ‘she' confronting a ‘he' who has more difficulty expressing himself? At all events the two contrasts gradually seem to engage together as one long theme.

The second movement is an intense, mystical combination of the free-standing theme of the flute with a close-ordered chromatic accompaniment. The opposites seem irreconcilable. In a quite different way, restlessness also marks the third movement, which begins by throwing down a drastic, syncopated gauntlet. Along the way the theme gradually changes, and themes from the previous movements are fused in the general metamorphosis. The music ends in spite of everything in calm harmony with itself.

I 1933-34 Holmboe travelled in eastern Europe, where he studied the folk music of shepherds and Gypsies along with his Romanian-born wife, the pianist Meta Graf. The music of the Balkans influenced him deeply - not so much its style as its expression. \\The direct and emotional, the feeling and the quite clear expression - that interested me greatly. There was something elementary in this music,\\ he reminisced as an old man.

The string trio Gioco (\\Game\\) from 1983 shows that even half a century later Balkan music could be an inspiration. A good example is the first movement with its ostinati and syncopated rhythms. The beautiful second movement, on the other hand, is a \\Danish summer pastorale\\ in a tradition that goes back to Carl Nielsen or even farther. Not without reason, the score ends with the place of composition: \\Arre boreale\\ - Latin for Holmboe's beloved Arresø.

The third movement is a very short, formal Adagio. A serious memento amidst the enjoyment of the bright moments. In conclusion Holmboe shines brilliantly in the fourth movement with a fugue - for the composer apparently an amusing hobby, but for the three string players something of a challenge! Gioco is a divertimento by a 73-year-old who knows how to write music that is at once artful and light.

The most unusual work in this collection is Ballata op. 159, a piano quartet written in 1984. Ballata is to be understood here as ‘ballad', that is, a folk song. It is a rhapsodic piece typified by a modal folk-music sound with roots far back in both Nordic and eastern European soil. Here, Holmboe is stylistically close to his chamber concertos of the 1940s, and one remembers his colleague Svend Erik Tarp's teasing remark from then: \\We are all fond of Vagn's Romanian folk rhythms from the Horsens area\\. (Horsens, in Jutland, was Holmboe's native city.)

The first movement is a powerful prologue to the second movement which is the main part of the work. Like a popular festival the music grows here through a combination of complex temperaments, and the movement even involves something as atypical for Holmboe as a long solo cadenza for piano.