Concertante works from one of Denmark’s most iconic composers and one of its freshest new voices. Pelle Gudmundsen-Holmgreen was the great maverick of contemporary Nordic music until his death in 2016. For Violin and Orchestra ventures into the jungle in classic Gudmundsen-Holmgreen style, leading us to consider our place in a world full of noises. Allan Gravgaard Madsen’s double concerto Nachtmusik takes the opposite route, blossoming outwards from the microscopic examination of a single note. Danish National Symphony Orchestra concertmaster Christina Åstrand brings both works to life, joined by her duo partner Per Salo in Nachtmusik written for them. 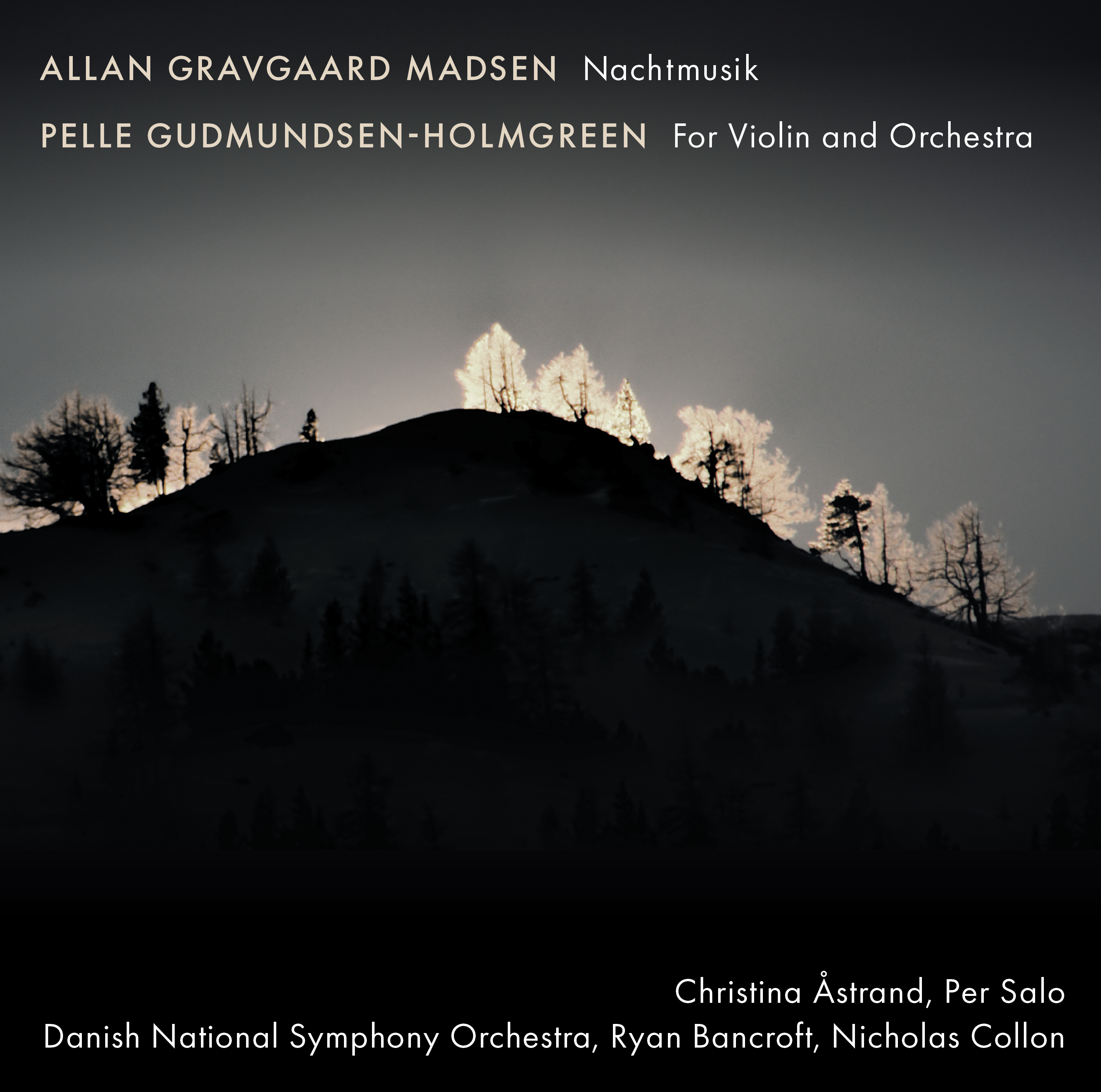 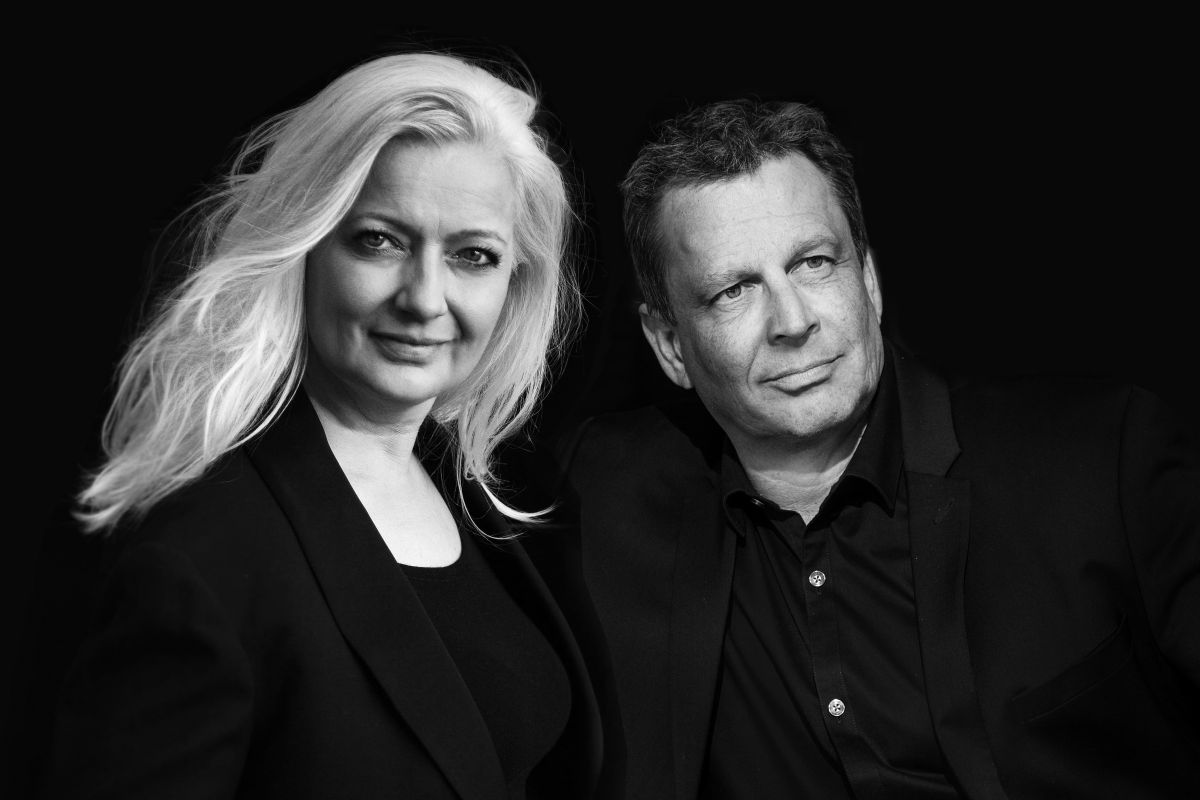 What is music if not time? It leads us forward, beat-by-beat, into new states and new places. Pity the composer, who might not know where those places lie nor what gremlins lurk therein. ‘As a matter of fact, it is dangerous being a composer', Pelle Gudmundsen-Holmgreen said in 2014: ‘More tempting than to travel first class, is to head into the jungle and find a way to survive’. One night in 2018, Allan Gravgaard Madsen ambled into the darkness of an Aarhus forest with a microphone, only to get spooked and run back for the safety of the city.

Pelle Gudmundsen-Holmgreen fancied himself as an outsider in Danish music, looking on from the sidelines. Since his death in 2016 – his childlike countenance no longer present to persuade us otherwise – we have been reminded what a central and towering figure he was. Taking the lead from Ives, Cage, Stravinsky and Carl Nielsen, he created works that urge us to consider our place in a world overrun with both banality and beauty (he had a neat way of turning the former into the latter). He was a composer with a singular and charming voice, whose works are recognizable in an instant. With his fearlessness, individuality and meticulous craftsmanship, he inspired a generation of composers in Denmark.

One of them was Allan Gravgaard Madsen, who studied at the Royal Academy of Music, Aarhus, with Simon Steen-Andersen and Niels Rønsholdt. ‘Pelle was a hero to many of us,’ says Madsen, ‘because he had great breadth in his aesthetic expression and was not afraid to be himself’.

Allan Gravgaard Madsen is composer-in-residence at the Aarhus Symphony Orchestra and Artistic Director of the Århus Sinfonietta. Madsen’s music is distilled, dampened, poetic and occasionally haunted by ghosts from the Romantic era (not unlike that of his colleague Bent Sørensen). His works thrive on the musical tension between stillness and speed. Recently, they have tended to line up movements whose durations decrease by multiples. Madsen’s is tactile music, making the most of its own physical requirements and of the spaces it fills.

Nachtmusik certainly does that. It was written for the Danish National Symphony Orchestra’s concertmaster Christina Åstrand, the soloist for both works on this recording, and her husband the orchestra’s keyboardist Per Salo (together, they form the Duo Åstrand/Salo). The score’s three movements decrease in duration from just under 17 minutes to six and then to three (by a third and then by half) – a choreographed process of reverse distillation, where we find the most activity and material in the brief final movement and the least in the first, which is five times as long and contains almost no harmonic elements at all.

The work, commissioned by the Danish National Symphony Orchestra, was induced by Madsen’s nocturnal restlessness and fascination with nighttime. One night he recorded his regular daytime walk from Ingerslev Boulevard in Aarhus (Denmark’s second-largest city) to a bench by a lake in the Marselisborg Forests, expecting to experience ‘a transition.’ In fact, he heard very little. But he was taken with a detail: colours he knew from his daytime walks, rendered grey-scale by the darkness and moonlight. ‘I wanted to be loyal to my experience of nothing much happening. I also wanted to capture the experience of those changed colours; how that sort of thing adjusts your senses,’ explains Madsen. His first movement consists almost entirely of the note E, examined in both argument and concord by the two soloists – a delimited view of a single musical element normally experienced in a broader, brighter context. ‘Your senses adjust; you hear both the macro-cosmos and the micro-cosmos,’ the composer says.

The focus on a single note in this broad opening movement fixes the audience firmly in the music’s grip and creates a space in which the slightest harmonic seasoning has apparently seismic effects. After that long, tense induction, a moment of catharsis arrives courtesy of the extended D flat major chord that signals the first movement’s end. In its successor, the music settles into its own heartbeat – rhythmic stabilization – while its harmonic and timbral domains steadily expand. By the third movement, the music has a new depth and glisten. Before its groove graduates into a full dance, the music suddenly falls away.

In a number of Pelle Gudmundsen-Holmgreen’s works, we meet a protagonist – an organism with a biological pulse and affable spirit (possibly a furry creature, possibly a clean-skinned one) that sets out to make its way in the world, come what will. Our protagonist might be heroic, shy, gregarious, or self-conscious. It might even be self-critical. This is the basis of For Violin and Orchestra – a fairytale, a road movie, maybe a symphonic poem but probably not a concerto. The violin strikes out with wide-eyed innocence only to encounter various blocks of instrumental sound along its path. ‘The musical material is often associated with specific groups of instruments: the strings and their diatonic clusters (pizzicato to begin with), the woodwinds entering after about 10 minutes with an Arabic sounding tune, heard first in the bassoon … finally the brass and their jungle-sound.’

As the violin-protagonist continues on its way, those blocks start to conspire. They gain autonomy, able to merge despite their anatomical differences (timbre, rhythm, expression). The journey becomes one of ‘meetings, coincidences, additions and subtractions,’ according to the composer’s note, which ‘explains the conspicuous absence of the word concerto.’

‘The world is full of objects, creatures and materials,’ said Pelle Gudmundsen-Holmgreen in 2014; ‘stone and metal, a little bird and a huge elephant. A sparrow is just 5 grams of creature!’ For a time, our violin-creature remains untainted by the emotional complications of vibrato. It becomes, by turns, obsessive and introspective (particularly in two cadenza-like sections) while at the same time understanding more of itself. It settles into a full repertory of echt-Pelle Gudmundsen-Holmgreen itches, scratches, twitches and ticks. Sometimes the music gets stuck, like an animal stymied by its own anatomy.

From within the melee of those opposing elements, pure beauty emerges when our journeyer takes on a tune that has been rumbling away for some time within the string block (it sounds like a snapshot of the melody from Gabriel Fauré’s Cantique de Jean Racine) and sings it, caressed by horns. This becomes a lullaby that serenades the protagonist gently home. ‘When you put simple things together, it creates a kind of chaos,’ said Pelle Gudmundsen-Holmgreen. ‘I like this, and the idea of, by degrees, being able to find your way out of the material – first being shocked, and then being able to see what it’s about.’