Mixed Company is the world premiere recording of a remarkable cycle of works by Pelle Gudmundsen-Holmgreen (b.1932) presented by London Sinfonietta, Theatre of Voices and conductor Paul Hillier. Composed around John Dowland’s iconic Lacrimae, these seven new pieces have all been tailored to the excellent “mixed company” of Danish and English vocal and instrumental performers gathered in Copenhagen to celebrate the Danish composer in 2012. 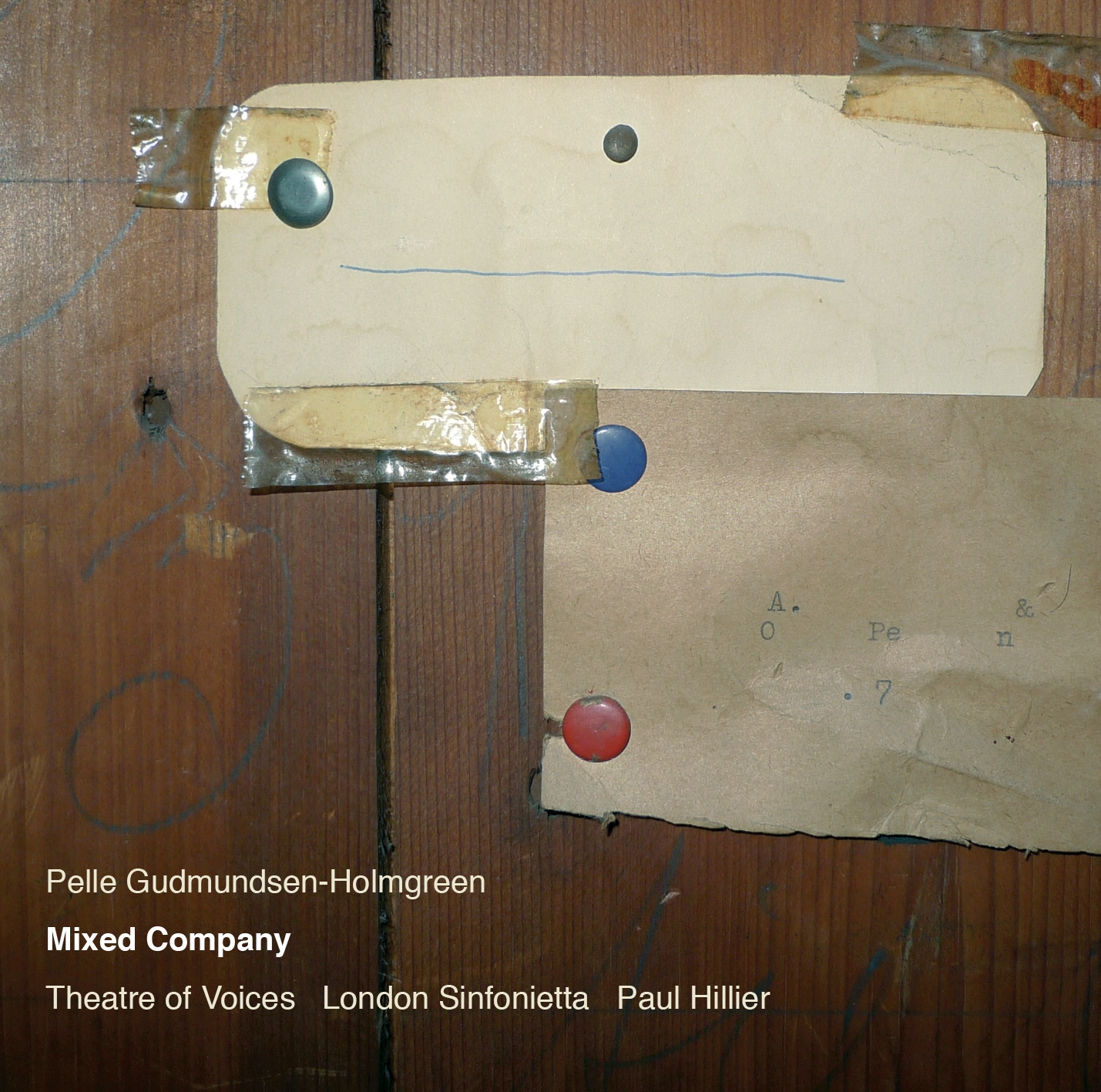 The company foregathered to play PLAY and COMPANY is a mixed company of two different ensembles from two different countries, united by the happy example of Dowland’s wanderings four centuries ago. The music stems from the pens of two contrarian composers: a contemporary Dane writing for an English instrumental ensemble and a Danish vocal group that is both Danish and English, and the aforementioned Englishman whose most famous SONG – Lacrimae – was most likely composed in Denmark. We find ourselves therefore in very mixed company, with all the many pleasant undertones that such a phrase can evoke, in which the SOUNDs of Dowland’s tears TURN about, first setting the mood and then changing it. Thus RUNning around in circles we named the disc accordingly.

In the dedication John Dowland gave his Second Book of Songs or Ayres (1600), he noted he was writing ‘from the court of a foreign prince’. By then he had been two years in the service of the Danish king, Christian IV, an absence that may have given a personal sense to the words he wrote for the book’s second song: ‘Flow my tears, fall from your springs; Exiled for ever, let me mourn where night’s black bird her sad infamy sings’. ‘Exiled’ also in other ways, this song is a classic expression of that feeling of aloneness and estrangement the age called ‘melancholy’. Moreover, the words are doubtful and unstable tenants of music Dowland had written four years earlier as an instrumental pavan, under the title ‘Lacrimae’. Now those words and that music, still in Denmark, haunt pieces by Pelle Gudmundsen-Holmgreen, and find another exile in the twenty-first century.

The first two compositions here, both of which date from 2012, may perhaps be regarded as satellites of the ‘Flow my tears’ cycle, or else as exiles from it, for though they do not allude to the song directly, they set out the forces and something of the atmospheres to come. Run is for a very similar but smaller line-up of low wind instruments (bass clarinet, contrabassoon, trombone), two percussion players and solo string quintet, but with the double bass allied with the wind and percussion to suggest a growling jazz group that has a string quartet in tow. Turn II, besides bringing in voices, fields bass flute, guitar, harp and percussion, and so adds most of the remaining instruments, leaving only the horn yet to appear.

Hot from the outset, and dark, Run gains a glimpse of clarity in a quick arpeggio of violin harmonics and moves into a slower section of trombone verses accompanied by bass clarinet, though with the pulsation of the opening still flickering in the background. Its might restored, it goes on through bumps and restarts to recover, twice, the low B flat on which the trombone entered at the beginning. There is restlessness all through – an impression, perhaps, that the instruments are not altogether willing team players but pull and push in different harmonic directions.

This is even more the case at the beginning of Turn II, which expands a 1993 piece for soprano, bass flute, guitar and harp, and which, unlike Run, features quarter-tones and unusual effects (most of all on the bass flute). Three instrumental lines – from guitar, bass flute and percussion, entering in that order – seem to be tugging as much apart as together, each with its own worries. The guitar, for instance, is drawn to C on the treble staff, a note it reiterates in its opening gambit, the whole of which it repeats now and then. At the second repetition the harp enters and also the first voice, a soprano chanting vowel sounds, one per note, always on the beat. Regularity here, of mode and rhythm, could hardly be more in contrast with the continuing instrumental jumble, and yet the voice appears integrated into its context. Two things unalike are in the same space. And so it remains as other voices are introduced, and as these move into a new set of vowels and notes. Finally, though, with the scoring returning to that of the original Turn, voice and instruments are in accord. Turning and turning, the music has become increasingly diatonic, to the point where the soprano can keep cadencing on the note, A, from which ‘Flow my tears’ and all its derivatives here assembled depend.

Among the latter, Song, Play and Company, all written in 2010, are strongly connected in that Song and Play together form Company. (The composer surely wants us to remember that two of these titles are shared with works by Beckett.) Song starts out from that A, which it occludes with quarter-tones, and then gradually assembles notes and phonemes from the opening lines of the Dowland, especially the phrases ‘Flow my tears’ and ‘Down vain lights’, both set to the descending scale A–G–F–E. Occasionally, to manifest inarticulacy, one of the four voices will choke to a standstill as the throat is closed, but mostly the elements of the song just float and repeat. Stages in the recovery process include an A minor chord, the first connected words and the first direct quotation of music and words together (at ‘night’s black bird’). The coalescence of the original continues until Dowland’s whole beginning is restored, but in A major, which curiously sounds more fragile than the true A minor. Then, almost inevitably, the image dissolves.

Play, as it almost must, also unfolds a process of restitution and loss, but with different materials – iterations, ostinatos, eruptions, arpeggios – towards a different destination. The ending is again in A major, but the ‘Flow my tears’ scalewise descent is now the outcome of a mirroring ascent, from E to A. As this falls apart, we might be reminded less of Dowland than of Mahler.

Before Company come two more dismantlings of the Dowland song, again drawing on the phrases ‘Flow my tears’ and ‘Down vain lights’. Sound I (2011) is a study in consonants and pulsed rhythm, until ultimately it discovers vowels and pitch: the eternal A, voiced by soprano and alto, then by alto and tenor an octave lower – though the final gesture brings a touch of the composer’s humour. Sound II (2012), beginning from a point shortly before this, is conversely tuned all through and largely made of vowel sounds. Song is recalled, notably in the soprano’s spectacular slides from the central A up to a high B flat, but there is barely a hint of the Dowland. Instead the model is displaced once more, towards the communal music of pygmy people.

Heard conjoined as Company, both Song and Play are recognizably the same, of course, but also entirely different. Play now has a defined object for its energy in Song, which it by turns instigates, bolsters and obtrudes, and Song now rides the waves of an audible storm. The ending, which in both Song and Play was a farewell, is now much more an arrival, of music no longer in exile.

Paul Griffiths was born in Wales in 1947 and is the author of several books on music as well as novels and librettos.