Traditional Nordic folk music with roots in the Middle Ages meets three new compositions by Pelle Gudmundsen-Holmgreen, Sunleif Rasmussen and Rune Glerup on this CD debut of the Danish trio Gáman. The rare combination of drum songs from Greenland, chain-dances from the Faroe Islands, wedding music from the island of Fanø and new sounds by three living composers becomes an opportunity to dance, listen and immerse yourself in worlds of sound that surprisingly and enrichingly elucidate one another. 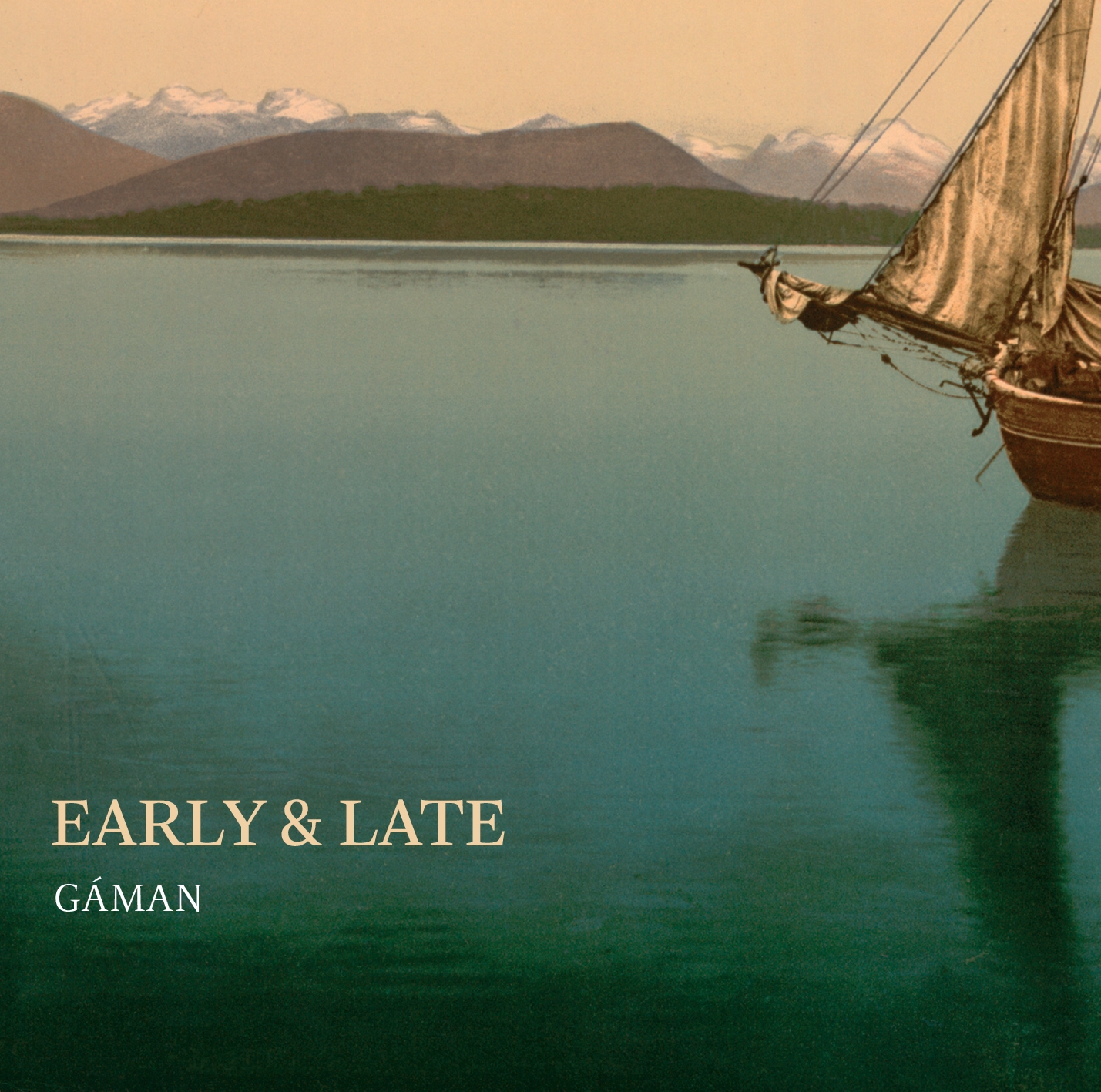 "The disc offers a highly distinctive concept and timbral palette, and it is beautifully recorded."
Davld Fanning, Gramophone
"The sounds and general concept behind this project are unique and captivating [...] Everything is beautifully recorded and enthusiastically and brilliantly performed [...] A brilliant idea."
Gary Higginson, MusicWeb International
"In her charming, highly informative liner notes, Trine Boje Mortensen traces how the folk music intertwines with the new."
Laurence Vittes, Audiophile Audition
Total runtime:
50 min.

Music from Denmark, Greenland and the Faroe Islands

The ensemble and the project

Gáman – the word means merriment. It is a self-made variation on the Old Norse gaman. Fun and games. The joy of playing, of listening, joie de vivre.

The project began in 2007 over a glass of wine, when the three musicians had the idea of mixing brand new and very old. Folk music and new music from the same country, collected in six Nordic countries – Denmark, Sweden, Norway, the Faroe Islands, Iceland and Greenland.

No sooner thought than done, and composers in all the countries were contacted. The folk music and the contemporary works that emerged have since then been played by Gáman in among other places Denmark, Greenland, Iceland, the Faroes and the USA. And now here is the CD, which documents the successful concept in a more enduring form. Denmark in the very widest sense stands at the centre of this CD; the music is from Green-land, the Faroes and Denmark itself. Three new compositions and a number of the folk dances and songs from each part of the kingdom.

“The starting point was to create our own repertoire,” says Bolette Roed, after a brief presen-tation of the problem of finding works for the ensemble violin, recorder and accor-dion. Andreas Borregaard continues: “To an individual extent, each of us has a -history in folk music and in contemporary music, so those were the fields we decided on. To make the project cohere we chose the Nordic countries.”

When Gáman asked the living composers to write a work for the trio, they informed the composers of the concept: their works would be played together with old folk music. They didn’t ask the composers to relate to the folk music in their new works, and they have not done so. But what happens in the confrontation between old and new?

“We’ve experienced at the concerts that if the audience hears the folk music first, they get a different take on the contemporary music, because it is thrown into relief. The folk music, that was then, and now we are here today, and the cars are driving outside and the world out there looks as it does today, and that’s the world to which our contemporary music relates. I think you’re reminded of the time aspect; when music is made. In this context the audience comes to the new music with a more open mind.” This is Bolette Roed talking about the concert experiences and the repertoire, and Andreas Borregaard adds: “On the one hand there’s the intellectual approach where you come to think about what you hear in a different way. But there’s also the quite direct reaction from people rooted in the fact that it’s nice to have variety in the concert programme. In a way you come with fresh ears with each leap from one time to another.”

The Danish folk music on the CD consists of two Svabo Polonaises and three Bridal Pieces from Fanø. “We had a number of different tunes to choose from, including some from the melody book of the Bast brothers. But we ended up falling for the two polonaises and the bridal pieces.” The speaker is Andreas Borregaard.

Rune Tonsgaard Sørensen: “The three bridal tunes are three iconic melodies that could be great to try our hand with. When you say folk music from Denmark, Sønderho on Fanø will be the first thing lots of people would mention. The music from this small village, where people still dance in the village hall, is quite sublime, and of course that’s the main reason we’ve chosen to play it. The tunes are so simple. There’s nothing and everything in them at the same time. It’s incredible how much feeling you can get out of just a few bars.”

The configuration of Gáman is unconventional in classical music, and the -ensemble also plays the folk music in unconventional ways; there is no singer performing the Faroese kvad or the Greenlandic songs, and the music is arranged and rewritten so it suits the three musicians. “Of course there are always those people who say ‘you shouldn’t do that’. We don’t care about that. Folk music is after all a kind of functional music. Originally it’s dance music, but with a CD like this you usually sit there listening to the music. So we also have the possibility of taking some slightly greater liberties with the form and harmony.” This is Rune Tonsgaard Sørensen talking about how the trio goes a little further in the interpreta-tions of the Danish folk music than the traditionalists may be used to. Andreas Borregaard adds: “So you can dance to the CD if you want, that would be beautiful! That whole element formed by dancing is after all absolutely tremendous, it’s indescribable. So, if there’s no dancing, and all you have is the music on a CD, then something else is called for. That’s why we build further on harmonies and tempo, for example, in our arrangements.”

Andreas Borregaard, who has been a guide in Greenland, says that in connection with the project Early and Late he bought a CD of around 50 different Greenlandic songs, each lasting a minute or thereabouts. They were recordings of Greenlanders sitting -singing the traditional songs. “Out of the fifty or so songs we have chosen those that spoke most to us. There’s a tune, sometimes with drum accompaniment, but there’s no other tradi-tion for playing these songs than the one we heard on the recording. So we try to recreate the mood, the expression in the song. The solitude and the wide open -spaces.”

The trio have a close relationship with the Faroese melodies, among other reasons because many of Rune Tonsgaard Sørensen’s family come from the Faroes. In this case Gáman has a closer personal relationship with the texts and the traditions. These are songs, kvad and ballads that people dance the chain-dance to. And as in Greenland it isn’t usual to play these songs instrumentally. Rune Tonsgaard Sørensen explains: “These melodies have some of the same qualities as the Sønderho music; they’re very simple and incredibly beautiful. They are songs and ballads about kings and queens, heroes and historical events. That’s what they’re about. Except Goodnight and farewell, a song from Suderø that is always the last song people sing in an evening of dancing after you’ve been sweating and dancing and drinking all night.” At the beginning of Ormurin langi the trio have raised their hats to the roots of the music in dancing and recreated an instrumental version of the Faroese chain-dance steps; two to the left and one to the right, the notes echo the steps of the dance.

Just as you can sense the dance steps and song in the Faroese folk tunes, the Faroese landscape can be felt in Faroese-born Sunleif Rasmussen’s Accvire. The title is a concatenation of the English names of the three instruments: Accordion, Violin and Recorder. “It’s just landscape music!” says Rune Tonsgaard Sørensen. “The Faroese landscape and the VERY change-able weather. In five minutes you can pass from the loveliest sunshine to lashing rain. And then there’s fog, and then a storm. At least the music evokes very specific, clear land-scape images in us. When you have a spectacular landscape like that of the Faroes, it rubs off on the art.”

Rune Glerup’s work has the French title objets/décalages, which means objects/time shifts. The work is built up of five different parts – A, B, C, D, E – and Bolette Roed says: “Rune Glerup’s idea was that you hear the parts differently depending on what comes before and after. So the five parts are repeated but presented in different orders, so that they appear in different contexts.” Both Sunleif Rasmussen’s and Rune Glerup’s works have been in the ensemble’s repertoire since 2008, while Pelle Gudmundsen-Holmgreen’s Together or Not is of more recent date. It was commissioned for Gáman’s concert at the Other Minds festival in San Francisco, where they also performed among other pieces Accvire. “In terms of sound Pelle Gudmundsen-Holmgreen has challenged our instrument combination in Together or Not,” says Bolette Roed. Andreas Borregaard adds, “We have our separate sound-worlds that are very far from one another. And presumably the title says that the three worlds perhaps nevertheless hang together.”

Trine Boje Mortensen is a music journalist and music presenter with a past on the prog-ram-ming staff of DR’s P2 and as editor of the quiz game Bezzerwizzer. She is also a blogger on www.nutidsmusic.dk

Gáman would like to thank the following foundations for financial support to the project “Early & Late. Folk music and new music from the Nordic countries”: