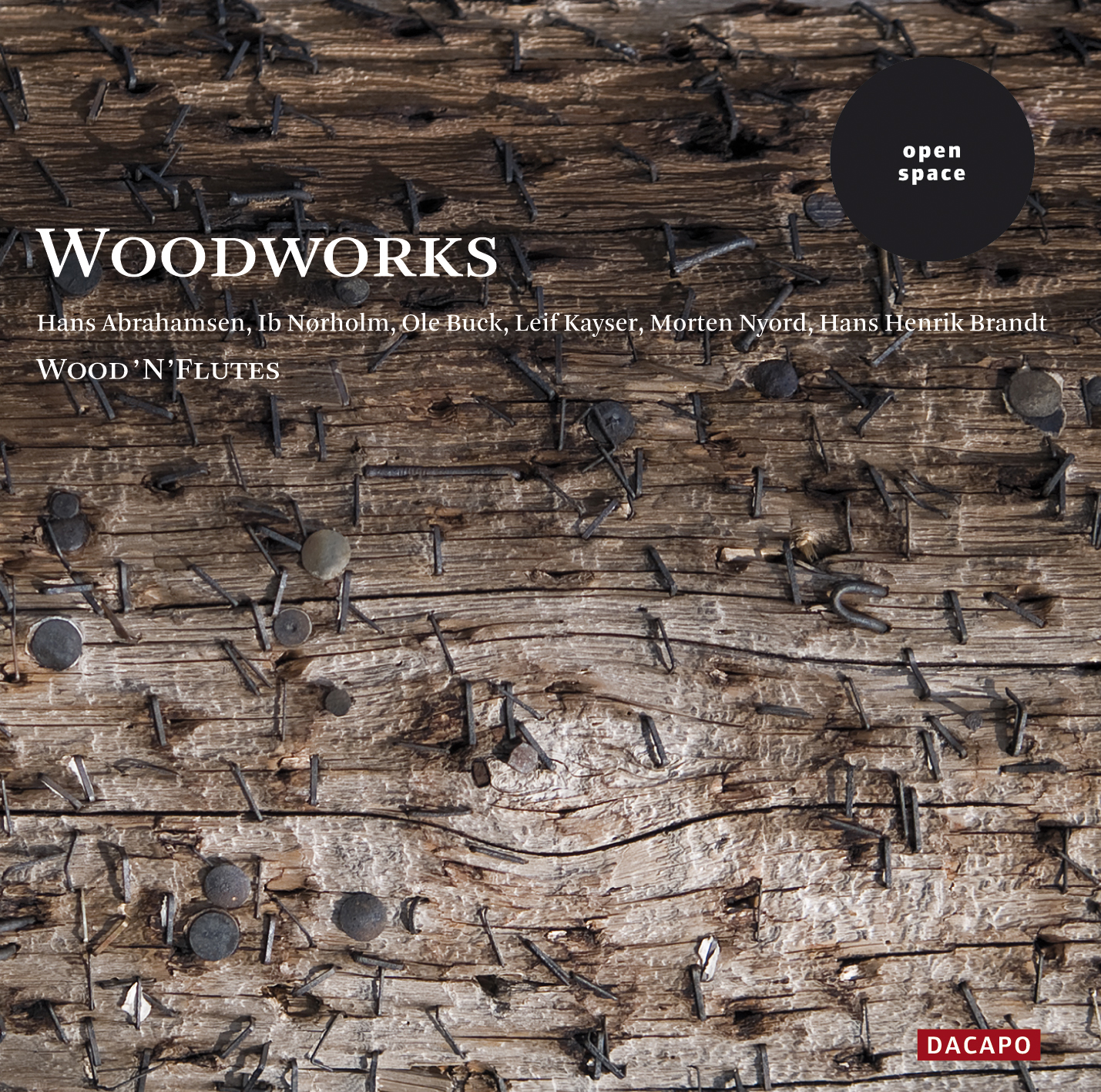 Denmark is a nation with a long standing tradition of virtuosic recorder players with many original works written for the instrument. This collection presents a selection of this rich recorder repertoire spanning the past 50 years. New Danish compositions are an integral part of Wood'N'Flutes' repertoire. The trio has premiered, arranged and commissioned several works on this CD, none of which have been recorded before. The common factor in all of the pieces is a musical connection between the past and present.

In Denmark the modern renaissance for the recorder began around 1930. Some of the young composers of the time studied in Germany and saw how the recorder was used in modern pedagogy. Composers like Finn Høffding and Otto Mortensen were inspired by the music educator Fritz Jöde to use the recorder in their new folkemusikskoler - folk music schools. The German immigrant, Carl Maria Savery, was also part of this movement and in the beginning of the 1930's one could find several folkemusikskoler all around the country where one could study music theory and music proficiency according to the latest methods.

The recorder played its first part in Danish concert life in the 1950's. For the first time one could hear, for example, Bach's Brandenburgh Concerto #4 performed on recorders as Bach originally wrote. The recorder milieu was still semiprofessional however; the players were typically vocalists, organists or other wind players who to some extent taught themselves how to play. In 1957 the Royal Danish Academy of Music accepted the recorder as an instrument for teaching degrees and finally, in 1963, as a main instrument, which signaled a new age of recorder playing in Denmark.

Most of the music written for the recorder during the two decades after its arrival in Denmark was for teaching purposes. It wasn't until the second half of the 1950's that the first real\ concert pieces were written by Leif Kayser, Niels Viggo Bentzon and Herman D. Koppel, among others. Ib Nørholm also wrote some of the first modern Danish recorder music, namely two Trios and a Quartet, published as his Opus 16. They were written in 1958, just a few years after he finished his studies at the Royal Danish Academy of Music. The young Nørholm was assistant organist at the Helsingør Cathedral, where a little group of recorder enthusiasts, (the Cathedral organist among others), encouraged him to write for the instrument. That struck a familiar chord with him, as he grew up with recorder sounds. His parents had been students at Savery's folkemusikskole and had played alto and tenor recorders at home. Nørholm admits to having played the recorder himself, although in private! Opus 16 is a completely forgotten part of his substantial production, and before this recording, Nørholm never heard the pieces performed. The two trios are originally scored for two sopranos and one tenor recorder, but Wood'N'Flutes has chosen to play the pieces an octave lower.

Leif Kayser was also an organist and composer, and even more of a recorder pioneer than Ib Nørholm. Kayser's Divertimento II for recorder ensemble was written with the instrument's traditional past in mind. Although the work is neoclassical and uniquely Kayser's, the modality and counterpoint are strongly connected to church music and to Dutch renaissance polyphony.

Divertimento II has been a part of Wood'N'Flutes' repertoire since 1999 when they performed the piece at a concert celebrat-ing Kayser's 80th birthday.

The generic title of divertimentocovers a large and ambitious four movement work, where Kayser compares the recorder ensemble with a more classic type of chamber ensemble. The piece was written during the years 1969-73 and by then he had some experience writing for recorders. (Divertimento I is from 1968). His characteristic tonal language fits the recorder brilliantly. The movements are tight, strict and clean with traditional part-writing as their natural expression.

Kayser's sense of tradition and theoretical counterbalance are apparent in the first movement's neoclassical sonata form and the second movement's fugal \\Ricercare\\. The influence of role models Hindemith and Carl Nielsen are clearly heard in the first two movements (Kayser was a student of Poul Schierbeck, who was in turn a disciple of Nielsen), while Nordic strains and Bartók seem to keep a careful watch over the two last movements. The divertimento's traditional stereotype as light, easy-listening music makes itself apparent in the quick, dancelike \\Finale\\ of the fourth movement.

Hans Abrahamsen originally wrote Flower-songs for three flutes. This version for recorders was adapted and reworked by Wood'N'Flutes with the composer's endorsement. Because the flute has a larger tonal range than the recorder, Hans Abrahamsen was quite astonished that it could be played on recorders at all, but Wood'N'Flutes solved that by switching instruments several times while performing the piece.

Flowersongs is from 1973 and stems from a period when many of Abrahamsen's works were about nature, flowers, birds or freedom; sometimes utopian or naïve conceptions in the Flower Power spirit. The instruments play in different layers yet all the while connected, like a flock of birds, or whirling leaves in the wind. The piece is divided into four untitled sections and is extremely virtuosic - Wood'N'Flutes says that it is one of their favorite and most demanding works. Rhythmical precision and a keen sense of intonation are needed, and with that, as this recording proves, Flowersongs can succesfully be accepted as a principal work for modern recorder trio.

Abrahamsen's Zwei Schneetänze (Two Snow Dances) were written for a youth music festival in Austria in 1985, where it was premiered by four recorder students between the ages of 10 and 12. The Snow Dances are minimal music on quite a different level than Flowersongs. They are but a few minutes long and the range and number of notes are condensed, not only for the sake of the young musicians. These two pieces are written with the utmost precision and balance between insightful and comical, wise and naïve. Snow is depicted by the downward falling motion of the music, the soft sounds and the light footprints that seem to disappear all by themselves, and the innocent association to the children's homeland. When Abrahamsen wrote Snow Dances he had only just recently (and rather belatedly) discovered the children's classic Winnie the Pooh and had Pooh's song in his head while writing the music. \\The more it snows (Tiddelypom), The more it goes (Tiddelypom), The more it goes (Tiddelypom), on snowing\\. The structure of the verse has clearly left its mark in the first of the two dances, where the falling legato melodic line is accompanied by two staccato voices in canon at the half step. In the second dance, Abrahamsen is citing one of his own tunes, Efterår (Autumn), while the tempo description (... im Tempo eines Ländlers) is clearly a friendly nod towards the young Austrian musicians.

Ole Buck's music is related to Abrahamsen's by its poetry, clarity and simplicity. They were both leading representatives of the trend in Danish music called \\The New Simplicity\\ that emerged in 1960's and 1970's, and they both master the same perfectionistic writing style and subtle humor. Of the two of them, Buck can be said to be running \\off the beaten path\\.

His Estampie in three movements was commissioned by Wood'N'Flutes and written and premiered in 2005. It is hypnotic, minimalistic music with references to the recorder's distant past. In the second movement, Buck reworked an original Estampie for organ found in the famous Robertsbridge Codex in England from 1360, which contains some of the oldest written pieces for keyboard. In the first movement, the dance music of the Middle Ages is given a funky twist and in the third movement one senses the ecstatic effect that the perpetual rhythm has over a person. One is reminded of the outbreak of dance mania in the 1300's, where the people in several European cities would dance themselves into a trance. One of the great authors of the time, Boccaccio, was apparently quite familiar with the contagious effect that a proper Estampie had on people and in his Decameron he describes it as excellent for distracting evil thoughts from the decadent youth.

The recorder is once again used to represent nature and bird sounds in Morten Nyord's Fløjteskove (Flute Forests). Nyord is the organist of Vor-ding-borg Church and studied composition with Niels Viggo Bentzon and Yngve Jan Trede. He has written mostly church music and works for choir, and chamber music as well. Nyord dedicated Fløjteskove to Wood'N'Flutes after hearing the trio perform in his church.

As is often the case with baroque works by Handel and Vivaldi, the recorder incarnates bird sounds. Morten Nyord amplifies the effect of birds in a forest by asking the players to stand at opposite ends of a room while performing. The three movements are loosely based on Danish songs - all about the forest and its birds. The first movement is based on an old children's song, I skoven skulle være gilde (A banquet in the woods),which deals with an unrestrained bird party. The second movement is graceful evening music with the poetic folk tune, I skovens dybe, stille ro (All in the quiet forest deep) used as an underlying foundation, and the third movement is based on a Hans Christian Andersen song, Hvor skoven dog er frisk og stor (How wide and fresh the forest is).

Contemporary of Morten Nyord, Hans Henrik Brandt is a recorder player and flutist. He has written several works for solo flute and recorder, many of which have evolved from improvisations based on Danish folk songs, star signs, and, in Colours of Music, the seven colors of the rainbow. From this work he arranged Farven blå (The Colour Blue) as a written solo piece for alto recorder. In Brandt's own words, Farven blå is \\... my attempt at describing the inner peace one can find when one stares at a perfectly blue sky on a clear day for quite some time\\. Brandt gave his consent to Wood'N'Flutes to arrange it for their trio. The beautiful, moving melody is a permanent part of their concert repertoire.

Cover and inside photo: William Stickney Photography
Graphic design:
Elevator Design>
Special thanks to Bill Stickney for his photos and insight