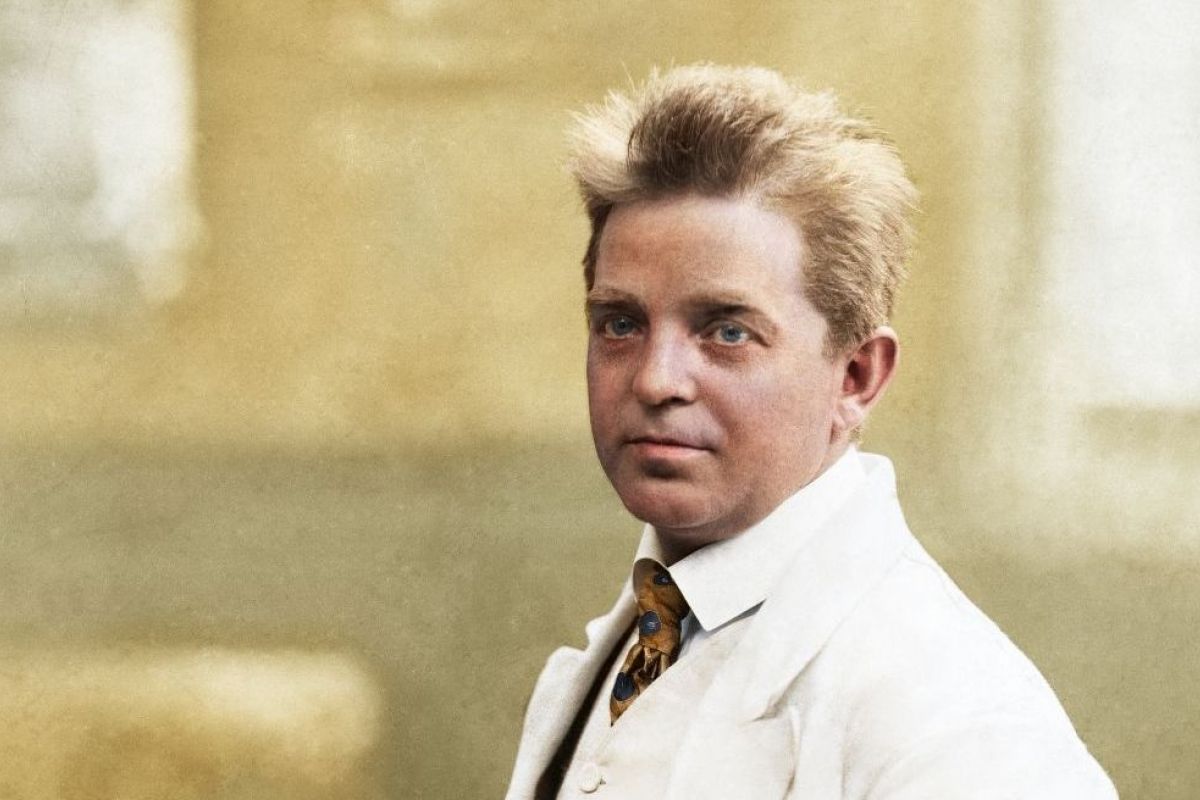 Carl August Nielsen was born on 9th June 1865 at Sortelung near Nørre Lyndelse on the island of Funen. His father, who was a painter, also worked as a village musician, and as a boy Carl was already playing in his father's dance orchestra. At the same time he played in the local amateur orchestra, Braga, whose repertoire, besides entertainment and dance music, also included the symphonies of Vienna Classicism. At the age of just fourteen he was engaged as a trombonist in the regimental band in Odense.

Alongside his work as a military musician he played string quartets with his friends and studied Das Wohltemperierte Klavier on his own initiative. From these years came his first real attempts at composition - mainly chamber music works in the Classical style.

Thanks to patrons in Odense, Carl Nielsen had the chance to go to Copenhagen, where he studied at the Royal Academy of Music in 1884-86 with the violin as his main subject and the Joachim pupil Valdemar Tofte as his teacher. He was also taught theory (by J.P.E. Hartmann and Orla Rosenhoff), piano (by Gottfred Matthison-Hansen) and music history (by Niels W. Gade).

After his years at the Academy he continued his theoretical studies with Rosenhoff and in 1888 he felt ready to publish his opus 1, the Little Suite for Strings. The next year he was engaged as violinist in the Royal Orchestra, a position he kept until 1905. In 1890, as recognition of his talent, he was awarded the grant Det Ancker'ske Legat, which enabled him to go on a study trip to the Continent. During this trip, in 1891, he married the sculptress Anne Marie Brodersen, who remained his wife for the rest of his life, although the marriage underwent serious crises in some periods.

From 1901 he was granted a Government salary, which meant that he was no longer forced to take private pupils to keep up the family finances. A few years afterwards he also signed a general contract with the publisher Wilhelm Hansen, who published more or less all his works until 1924.

Alongside his composing career Carl Nielsen was to hold several important posts in Danish musical life. In the period 1908-1914 he conducted at the Royal Theatre, then from 1915 until 1927 he conducted the concerts of the society Musikforeningen. In 1915 he was elected to the board of trustees of the Royal Academy, where he also taught theory and composition from 1915 until 1919. Finally he was on the boards of the Danish Composers' Society and the Society for the Publication of Danish Music.

From the earliest works on, Carl Nielsen's compositions were permeated by a Classicist aesthetic which deliberately avoided any element of Late Romanticism. But in the course of the 1910s and 1920s he oriented himself more towards the new currents in European music. Little by little he now worked several modernist elements into his music, but without at any time abandoning his very characteristic personal style. This development is very clear in the last three symphonies, no. 4 (1914-16), no. 5 (1921-22) and no. 6 (1924-25).

Alongside the increasingly modernist instrumental works Carl Nielsen worked, with his friend Thomas Laub for example, to reform the Danish national song tradition. This resulted in a number of collections of simple strophic songs where he deliberately tried to perpetuate the ideals of J.A.P. Schulz' Lieder im Volkston (1784).

Carl Nielsen had a distinctive literary talent which resulted in the childhood memoirs 'Min fynske Barndom' (My Childhood on Funen), which is amazingly objective and unsentimental, and the essay collection 'Levende Musik' (Living Music), where his anti-Romantic aesthetics were clearly expressed.

In later years Carl Nielsen suffered from a weak heart, and he died on 3rd October 1931 after a heart attack, 66 years old.